Even before Anais Sidonia was old enough to know ‘research scientist’ was a career possibility, she confesses she could envision herself in a white coat working in a lab. “I’ve always liked science. All of the other subjects seem like they’ve been figured out and there’s not much left to discover. But with science, no one really ever knows everything,” she says. 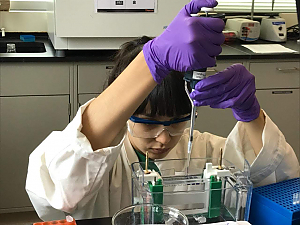 So it was understandable that Anais was excited for her Vermont Genetics Network internship in Dr. Jana Kraft’s research laboratory at University of Vermont. During her two months working with the nine-member team, Anais was tasked with extracting proteins from liver tissue samples taken from mice. She estimates that she analyzed nearly 100 samples using the lab technique known as “Western Blotting.” She says she also set aside time to do independent research that would help her understand not only what she was doing, but why.

Dr. Kraft says it was evident that Anais became well-versed in Western Blotting when she gave a presentation about it to the group. “I was really impressed; shegave such a clear and easy-to-follow presentation on a rather difficult subject,” says Kraft.;

Kraft adds that Anais exhibited the combination of intellectual and interpersonal qualities crucial for success in any workplace when she had to get someone else up to speed. “It was nice to see Anais mentoring/teaching another student. I actually think Anais could be a great teacher (she underestimates her ‘people skills’ and herself a lot),” Kraft says.;

Anais credits the academic support centers and social pragmatics program at Landmark College with helping her grow both as a student and a person. She has also been inspired by having professors who, like her, are women with learning differences.

Anais is the third Landmark College student to participate in a VGN internship since the partnership began in 2015. Melody Kabbai is now a pre-med student at the University of Rochester; Matthew Bavelock is studying engineering at UMASS Dartmouth. While she is still a year away from getting her associate degree, Anais says her ultimate goal is to get a Ph.D. and study progeria, a rare disease that causes premature aging.

“I don’t think I could have gotten any more fortunate, honestly, because not only do I have an internship before I even have a degree, but it’s extremely rare for an undergraduate to have a paid internship at a really good university,” says Anais. “This is definitely going to help prepare me. This is a skill that a progeria research lab would be looking for.”