Landmark College students choose many paths: Some stay at LC to earn a bachelor’s degree, some find their passion in the workforce, some continue their studies at other universities. Read a few of their success stories: 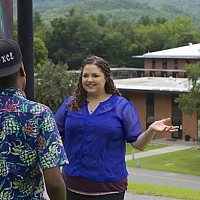 In fourth grade, Rachel Brown was diagnosed with ADHD, comprehension issues, and a nonspecific learning disorder.

“The doctor told my mom and me that I had ‘wicked ADHD,’” Rachel recalls.

School was difficult enough, but the perception that ADHD is a “hyperactive boy disorder” made it even harder for her. When she came to Landmark College in 2011, she was thrilled to learn that “faculty don’t judge you based on past failures. They look for your potential and help you figure out the best way to achieve it. They understand that anyone can have any combination of LDs and still be successful.”

Her experience as an associate degree student was so profound that Rachel decided to stay on for a bachelor’s degree: she was one of the College’s first recipients of a B.A. in Liberal Studies in May 2016. She is currently working toward a master's degree at Southern New Hampshire University.

Beyond the classroom, Rachel has thrived as one of LC’s student leaders. “I’ve had so many great leadership opportunities at LC: as an orientation leader, working with the Women’s Center, helping organize events like Spring Fling and Halloween parties with the Campus Activities Board, and as a Resident Assistant.”

Somehow in between all of that plus schoolwork, Rachel played softball!

She also spent Summer 2015 as a student intern in the Office of Marketing and Communications, where she worked on social media, videography, and event planning. “I gained invaluable experience for my future career in the marketing and communications field,” Rachel says.

Equally important are the friendships Rachel made at LC. “I was very shy when I was younger and I had a hard time finding my place among peers. Here, your academic success is directly tied to a feeling that you belong, because once you start experiencing success in the classroom, you open up socially.

“We all come from different backgrounds but we know that we’ve all struggled, and because of that we can relate to each other and build a strong community of friends.”

In May 2015, Everett Law graduated from Landmark College with an associate degree in liberal studies. A few months later, he was walking the campus of American University in Washington, D.C., on his way to earning a bachelor’s degree in American studies.

“Those are achievements that seemed unlikely just a few years ago,” says Everett, who graduated from American in May 2018 and was soon after hired as an admissions counselor at Landmark College.

In fifth grade, Everett was diagnosed with ADD, auditory processing disorder, and anxiety disorder. “My self-confidence was non-existent; I was working my hardest just to attain passing grades. I struggled even harder with the social aspects of school, feeling sometimes like I would never find a place where I could fit in and make good friends.” After struggling through high school and searching for a college that might be a good fit, Everett landed at Landmark College.

“My first semester here, I got Bs and Cs. With each semester after that, my grades climbed, and I eventually made the Dean’s List! The faculty at Landmark College always worked with me to develop ways to keep my learning differences from preventing my success. I learned to weave through the obstacles of my LD and work from a position of strength.”

Everett’s social anxiety immediately began to dissipate after arriving at LC. “My first roommate became the best friend I’ve ever had. The anxiety of trying to connect with peers began to disappear as I realized that we’re all coming from similar places.”

He began to find extraccuricular activities that he loved: campus ambassador, the College radio station, and as a representative on the Alcohol and Other Drugs Committee. A study abroad trip to Costa Rica was a fulfilled dream, something Everett couldn’t have imagined without the support he found at LC.

“My experiences at Landmark College have taught me to have ambition for success, and without that, I would not have been able to apply and been accepted to American University.” 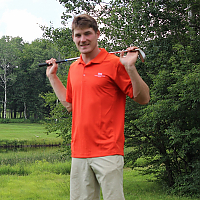 “Notice that the stiffest tree is most easily cracked, while the bamboo or willow survives by bending with the wind.”

With this favorite Bruce Lee quote, Zach Zoidis stepped off the campus of Landmark College in December 2014 with his Associate of Arts in Liberal Studies degree in hand - proof that he had learned to “bend with the wind” and discover his personal learning style. He credits the faculty and courses he took at LC with helping him find his spirit of adventure and the confidence to step into a desired career that indulges his passion for the outdoors.

“One of the reasons I came to Landmark was because it’s in Vermont. You can’t do better than that for all-season sports,” says Zach, who is also an avid golfer and fisherman.

His ADHD diagnosis made it difficult to sharpen his executive function and study skills, but his time at LC “prepared me to honorably meet my obligations and responsibilities as I transitioned into adulthood, whether it be in my personal life or academic pursuits.”

After earning an associate degree at Landmark College, Zach transitioned to an all-season job that found the seasoned snowboarder as an instructor at Mount Snow Ski Resort - one of the region’s most popular winter sports resorts among LC students. During spring and summer, he worked at the Mount Snow Golf Course.

Now, Zach has returned to his home state of Minnesota where he is pursuing some of his other passions – inlcuding yoga and Brazilian Jujitsu – which were cultivated at LC through the self-awareness he gained via regular coaching sessions and courses like “Positive Psychology.”

He has been certified as a yoga instructor and is even looking into longer-term education options. “I love what I’m doing now and I want to make the most of it, and at some point I plan to consider enrolling in a bachelor’s degree program.”