The Vision Renews: STEM and a New Beginning

Landmark College's 4th president, Dr. Peter A. Eden, leads the College in pursuing its mission in new degree programs and a renewed focus on the fields of science and technology. 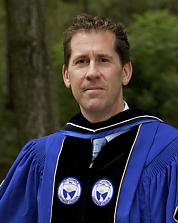 Peter A. Eden, Ph.D., took office as the fourth president of Landmark College on July 1, 2011. A scientist and researcher, he also is an accomplished educator and administrator whose passion for learning, innovation, and discovery infuses his aspirations for the College’s future.

A firm believer that “education is ripe for reinvention,” Dr. Eden embraces technology and champions the responsible integration of new technology in higher education. With a strong background in modern science, research, teaching and scholarship, he has been leading Landmark College into a new era of learning for college students with learning disabilities, ADHD, and autism.

In 2012, the College announced three new degree programs, one that transformed the College into a four-year institution (the Bachelor of Arts in Liberal Studies), and two that demonstrate a commitment to the STEM fields: an Associate of Science in the Life Sciences and an Associate of Science in Computer Science/Gaming. In partnership with the Marlboro College Graduate Center, Landmark College also launched a certificate program in Universal Design: Technology Integration for professionals in education, technology, and support services and offers both online and face-to-face learning environments.

A Foundation in STEM (Science, Technology, Engineering, and Math)

Since its inception in 1984, Landmark College has recognized that its students, while having learning differences such as dyslexia, ADHD, and autism, also have unique strengths and talents and an ability to succeed in many different fields, including science, technology, and math.

The path that Landmark College forged from its founding was unique. As the first college in the country to exclusively work with students with dyslexia, research and best practices for working students at the college level were scant to nonexistent. Determining the best methodologies for instruction was approached on two fronts, in the classroom and in the broader context of faculty research.

From the outset, Landmark shared its evolving methodologies with the educational community through its educational workshops and outreach activities which would evolve into the Landmark Institute for Research and Training (LCIRT).

Articles below reflect both the earliest efforts in working with students in the classroom and research into best practices in teaching in the areas of science, technology, and math that draw on students’ strengths in the areas of creativity, logic, structure, and perception. 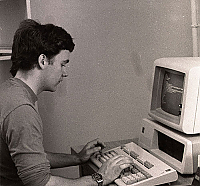 June 1988
Programming and the Dyslexic Student: Computer Science 102
Reviews the reasons learning computer programming could be helpful for students with dyslexia and the way it was taught to students in the earliest days of the College.

December 1989
How Landmark Teaches Mathematics to Dyslexics
Explores the reasons students with dyslexia struggle with math and presents the framework for learning in the math classroom in Landmark's earliest years.

Fall 2001
New Institute Will Expand Landmark’s Capacities for Research
Announces the creation of LCIRT and results of Title III funded research exploring the use of text-to-speech assistive technology with students with ADHD, which was presented at the International Dyslexia Association Conference.

Autumn 2006
LCIRT Grants Update
Discusses a funding request to the National Science Foundation that focused on the accessibility and usability of math software by college students with learning disabilities. (The NSF did fund the grant after the publication of this article.)

Profiles the third in a series of annual conferences cohosted with Dartmouth College on the applicability of Universal Design in teaching and learning.