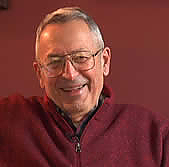 When Landmark College began in 1985, it had the intention of serving college-age students with dyslexia.

In subsequent years, the College's understanding of dyslexia and specific learning disabilities deepened and broadened, reflecting ongoing research findings from across the country and around the world. Attention deficit/hyperactivity disorder—not a recognized diagnosis in 1985—became increasingly common among the College's students by the mid-1990s. More often than not, changes in learning profiles necessitate changes in teaching methods. As the field of learning disabilities and differences expanded, so Landmark's approach to working with its students has grown more varied, but always with a constant unyielding mission to provide best practice for all.

In 1991, Gene Cesari became the second president of Landmark College. At the time of his hiring he was a resident of South Ryegate, Vermont and had been president of Cedar Crest College in Pennsylvania. It was understood from the beginning that his tenure would be between three and five years, and that his mandate would be to oversee the College's consolidation and systemization after the growth and development of the initial years.

Gene was a steady presence, a good listener, and a particularly strong advocate of science education. He formed the President's Council as a governing body. However, perhaps the greatest achievement of his administration required a similar kind of persistence: the purchase of the Fine Arts Building. It had been used for that purpose by Windham College, but for various reasons was not a part of the original Landmark purchase. The building was owned for a time by a local arts group, but grant money and ticket sales for performances could not cover the costs of such a large building indefinitely. The College did not have a pressing need for the space, but Gene saw its reintegration into the campus as both natural and necessary.