The Vision Matures: Completing the Campus and Creating a Research Institute 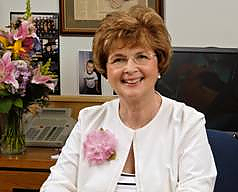 Dr. Lynda Katz was appointed the third president of Landmark College in 1994, and she served for a remarkable 17 years before her retirement in June 2011. Before coming to Landmark, Dr. Katz served as Program Director for Neuropsychological and Rehabilitation Services in the Department of Psychiatry at the University of Pittsburgh, where for 25 years she taught, administered, and did research. Her presidency ushered in a period of dramatic change at a pivotal moment in the College's history. Her original vision statement from 1994 suggests just how dramatic this change would be:

"Landmark College will become increasingly recognized as the center of excellence for teaching, research, and training in the learning disabilities field. Second to none, the name Landmark College will be recognized nationally and internationally as a resource for professionals in the field for persons with learning disabilities and their families, as the authority on postsecondary education."

The specific goals she wrote up that year were these: an enrollment increase from 350 to 400 students; the creation of an endowment program; the establishment of a faculty rank and promotion system; an upgrade of faculty salaries; the addition of a first-class athletic facility and a student affairs complex; the enhanced use of technology and classroom implementation; an increase in student retention; national recognition of Landmark College; and finally, an increased recognition of Landmark College as a major contributor to the State of Vermont. All of these have come to pass.

One of Dr. Katz's first objectives involved the improvement and expansion of the existing campus facilities. As she indicated: "When I came, most folks thought about the campus as a very narrowly defined space, primarily centering on the Administration Building and the residence halls. Almost immediately, the Fine Arts Building was renovated, having recently been purchased prior to my arrival. Then everything started to click in terms of a vision for a comprehensive campus that students would want not only to attend, but also one from which to obtain their degree."

After the Fine Arts Building renovation, the next large physical project involved an extensive renovation of the Student Center. Through ongoing fund-raising efforts, as well as the overwhelming generosity of founding trustee Charles Strauch and his family, the new Strauch Family Student Center was opened to the Landmark Community in 1997. Currently, it houses the offices of Student Affairs, Counseling and Health Services, the campus bookstore, student mailboxes, the Cafe, a student game room and several meeting rooms.

In attending sporting events on campus, Dr. Katz recognized that while its facility, an inflated dome that was affectionately known as the "bubble," had become a distinctive feature of campus, she also felt strongly that the Landmark Community deserved to have a true sports complex where the entire College community could participate in sports or cheer on the Land Sharks in relative physical comfort. Thus began a second fundraising project to bring the envisioned athletic center to life. 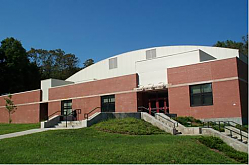 The Click Family Sports Center was dedicated on May 17, 2001, thanks to the incredible generosity of many individuals, but especially Jim, Vicki, and alumnus Chris Click. The opening of the Center coincided with the spring graduation that year, and the Clicks were present to cut the ceremonial ribbon, and to speak in front of what was the largest graduating class in College history. As a way of thanking them for their generosity, Basketball Coach John Wood awarded the Clicks the game ball of the final championship game of the team's undefeated season. The Click Family Sports Center houses a full gym, rock climbing wall, exercise pool, and weight room, and sees active use by the college community from dawn to dusk.

Early in 2004, the Board of Trustees directed the College to proceed with three capital building projects, all which were completed by the 20th anniversary: a newly renovated East Academic Building, an expanded Dining Hall, and the Bridges Residences.

The East Academic Building, or EAB as it is commonly known, was the last of the original campus academic buildings to be renovated. The renovation process used much of the existing building materials, refurbishing, renovating, and putting to good use much salvageable material, including using the old tables in the science lab as display space. It also incorporated a number of environmentally friendly building principles into its design and for this received designation from the state of Vermont as a "green" building. It houses the offices of Academic Affairs, as well as the Drake Center for Academic Support, a number of classrooms, offices, and a multimedia auditorium.

The renovated dining facility allows for the anticipated growth of the student population to 500, and includes a large dining area especially suitable for gatherings or presentations, as well as a small private dining room accommodating smaller groups.

In 2000, the College was awarded a 1.75 million-dollar Title III grant which has made possible various forms of professional development opportunities for faculty and staff, as well as allowing for extensive means of performance outcomes assessment by tracking students' progress and performance over time, and using that information to inform and modify the College's academic and residential life programs. During the previous year, Landmark received a Title VII grant from the U.S. Department of Education which allowed Landmark to share its expertise in teaching students with learning disabilities and ADHD with other colleges in Vermont and across the country. While Vermont Senator James Jeffords authored the changes in the Higher Education Act that created that new program, he credited Dr. Katz as well: "Her expertise was invaluable in helping to author the legislation—the first specifically recognizing the needs of college students with learning disabilities."

Lynne Shea was named Director of External programs (the predecessor to the Landmark College Institute for Research and Training) and the Project Director for Title VII. The grant resulted in a number of workshops for educators throughout the state, as well as four handbooks on LD and ADHD, on teaching writing, on reading and study skills, and on teaching in the content areas—all written by Landmark faculty and staff. Also, in 2000, the College was awarded a $425,000 National Science Foundation Grant to develop an Introduction to Biology curriculum based upon universal design; meaning the information taught would be accessible to all students regardless of learning style. Under the grant, Landmark College science faculty and colleagues from nearby schools and colleges created a teaching manual titled Biology Success! Teaching Diverse Learners: A Resource Manual for Biology Educators, intended to set the standard for the teaching of students with learning differences in the classroom.

The Library is currently open. Today’s hours are from 12 noon to 10 p.m.