Although Windham College closed its doors in 1978, it lives on in the hearts and minds of the many extraordinary individuals who taught and studied on its beautiful campus. A sizeable number still live in the area and enrich the local community with their talents.

The Windham Alumni Association organizes regular meetings, and alumni are most welcome to register and attend Windham Reunion events and Landmark College anniversary celebrations as well.

History of the Windham College Campus 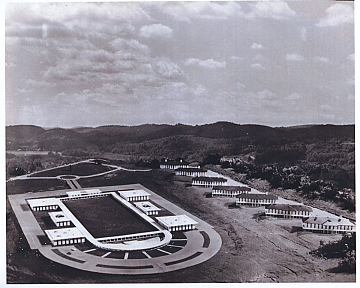 Landmark owes a significant debt to Walter Hendricks, founder of Windham College and the man who first envisioned the beautiful location in Putney on which the campus is situated.

Windham College was founded as the Vermont Institute for Special Studies with three students in the Winter of 1951 by Dr. Walter Hendricks and his wife, Flora, in their home on Kimball Hill in Putney, Vermont. From that small beginning, it would grow to encompass, by 1962, 21 buildings in Putney, and have 25 faculty and some 250 students.

Pictured at right: architectural rendering of the campus by architect Edward Durell Stone.

Along with its regular academic offerings, it developed a number of very successful programs, including the Fiction Writers Conference and Institute for Critical Languages, a summer linguistic and cultural immersion program. The College attracted a talented group of creative faculty whose efforts enriched not only the lives of the students, but through active and artistic programming, the lives of the greater community as a whole.

The success and growth of the College created a need for a more unified campus. Through the Higher Education Act of 1963, Windham obtained, by 1967, $4.3 million in federal funding that would help finance $5.4 million worth of construction. The remainder was made up with fundraising and loans (Windham College Newsletter, 1967). Ground for the new campus was broken in June of 1961. Poet Robert Frost, personal friend and mentor to Walter Hendricks, the College's founder and first president, attended the groundbreaking ceremony. The architect for the project was Edward Durell Stone, an internationally recognized architect of the era. 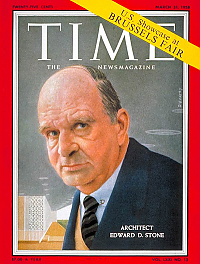 Stone's career, begun in the midst of the Depression, was aided immensely by his commission from Henry Luce, publisher of Time magazine, for whom he designed several homes. He would subsequently codesign the Museum of Modern Art (1939) and, after the war, the U.S. embassy in India (1954), the National Geographic Society headquarters (1961), and the John F. Kennedy Center for the Performing Arts (1969), as well as the State University of New York at Albany main campus (1968).

Early in his career, Stone was a proponent of the International Style, a development in modern architecture epitomized by buildings that were simple, unadorned, and used the most modern materials. Later in his career, he would become known for incorporating adornment in the form of grilles and cutouts, as well as emphasizing the importance of placement of buildings in relation to their surrounding landscape. Striking similarities can be noted when comparing Windham's architecture with other buildings he designed, including the use of the flat overhang roofs, skylights, and colonnades. The campus was begun in 1961, with Aiken Hall ready for occupancy by the following September. Other dormitories, including Frost Hall (named after Robert Frost), and main buildings would soon follow. 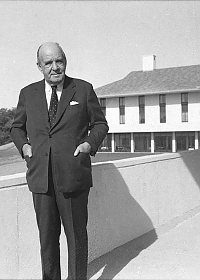 In 1967, Stone was invited to attend Parents Day to inspect the progress of the campus which, by that time, was almost three-quarters complete. In his address, he commented on the uniqueness of the commission, which allowed him to design the College from the ground up; a rare opportunity. He also indicated that he drew inspiration for the colonnade that connects the lower campus buildings from those that Thomas Jefferson designed at the University of Viginia (Brattleboro Reformer, 1967). That year, a residence hall was named for Stone, but when Landmark College reopened the hall in 1986, it was renamed Hall Four. This fall, the hall resumes its original name: Edward Durell Stone Hall, in recognition of Stone's enduring architectural legacy. 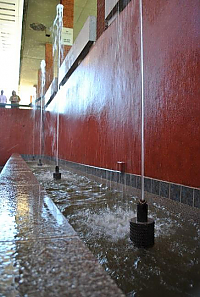 Landmark College's history is highlighted by its efforts to restore and honor critical elements of Stone's vision. In 1992, the Fine Arts Building was purchased and renovated, and in 2005,Windham College's science building reopened as the state-of-the-art, environmentally certified East Academic Building that retained Stone's signature features, including pyramidal skylights and a flat, concrete roof with a slotted overhang. In 2013, the fountain in the outdoor entryway of the Fine Arts Building flowed for the first time since the campus's Windham College days.

Landmark continued to balance the needs of the College with the beauty of Stone's vision with the completion of the Nicole Goodner MacFarlane Science, Technology & Innovation Center in time for the College's 30th anniversary celebration in Spetember 2015. This new structure unifies the east and west corners of campus with a buidling whose clean lines and linear design honors Stone's original plan, which had included a building at the head of the quad. 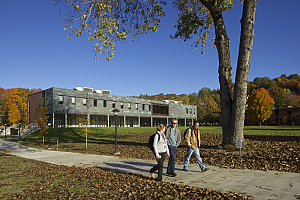 Edward Durell Stone: Architect
A comprehensive site created by Stone's son and biographer Hicks Stone, who is also an architect.

Edward Durell Stone: Legendary Architect
Photos of some of Stone's most famous buildings, plus a 15-minute audio clip of a 2011 interview with Hicks Stone.