Founding administrators of Landmark College laid a solid foundation the first college in the nation to serve students with learning disabilities. 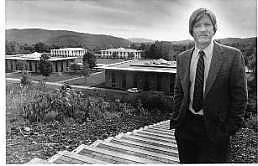 College founder Charles "Chad" Drake asked Jim Olivier, a former Landmark School instructor and supervisor, then practicing law, to become Landmark College's first President. Chad's instructions were as general as they were clear: in essence, "Start a college." Jim Olivier was entrusted with the challenging task of articulating Drake's vision, and Drake knew he would find a way to do it. Charles Harris has said, "Chad had a history of leaning on those persons whose intelligence and decision-making capabilities he respected, had observed firsthand and trusted."

Jim Baucom, also from Landmark School, became the first Academic Dean. Bob Skeele left his position as Dean at nearby Marlboro College to take the same post at Landmark. The early academic structure retained much of its unique student-development focus and would be divided into two programs.

Carolyn Olivier, who had been Director of Admissions at Landmark School, was asked by Drake to fill that same important post at the College. In the time she served as Director, she developed and refined the College's admissions practices and procedures. She interviewed students thoughtfully and probingly and read diagnostic information with a keenness and skill honed from many years of practice. Her remarkable insight and intuition gave her a profound understanding of each newly admitted student—knowledge that the faculty, staff, and the students themselves benefited from beyond measure.

Robert Hunt Rhodes, Librarian at Windham College, returned to become Landmark's first Librarian. Bob was given a special charge by Chad Drake to not only develop a general collection suitable for the new college, but also to develop a comprehensive collection of books in the field of learning disabilities—a collection that would eventually become one of the most extensive of its kind. Today, the Learning Disabilities, ADHD, and ASD Research Collection continues to grow, keeping steady pace with this ever-evolving field of education.

Jim Olivier left the presidency of Landmark College after serving seven years, two years more than the average tenure for a college president of that decade. If he had a single overarching characteristic as president, it was his deep and abiding commitment to the vision that Charles Drake had charged him with. Jim Olivier held earnestly to the principles of teaching and learning that formed Landmark School's educational philosophy, and he led the College accordingly. His solid common sense, his wry and sometimes surprising sense of humor, and his practical wisdom were all leadership qualities that the institution benefited from immeasurably every day. He put extraordinary effort into his day-to-day leadership of the faculty and staff, his commitment to the students, his work with the trustees, and his tireless efforts to promote the College.