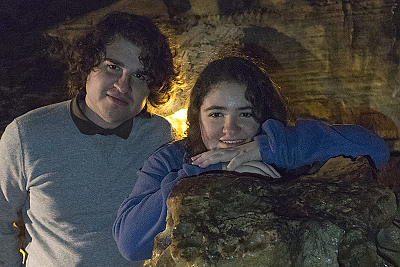 “It’s really interesting how we like the same things,” Michaela Bied ’17 said about the relationship she has with her brother, Seth Bied ’10. Despite their six-year age difference, they’ve shared similar interests in hobbies, TV shows, and movies for as long as they can both remember.

They also share an aptitude with numbers that has translated into careers in finance, for which they give credit to the time they each spent at Landmark College getting their Associate of Arts in Business Studies.

“I’ve always been stronger with math than with language. That’s why I went to Landmark,” explained Seth, whose previous stop at another school made him appreciate both the College’s resources and teaching style. “The faculty are knowledgeable about not only the topics they are teaching, but how to teach students with disabilities.”

For Michaela, the opportunity to make friends with other students who have learning differences was key to bringing her “out of her shell” as she puts it. “Even outside the classroom, we could go to the store, watch a movie, or play cards,” she remembered. She went on to add, “We are able to talk to our friends and the faculty about what our learning disability is.”

The social piece really sunk in for Seth later on, while he was going for his bachelor’s degree at a college where the student population was more than 10 times larger. “At Landmark, you’re put in a situation where you’re not only taking classes with other students, but you’re also eating in the cafeteria and spending weekends together,” he said. “You might go down to the lounge where people are watching a movie and you ask if you can join. Then you realize you have similar movie tastes.”

Seth and Michaela both currently live back in their hometown of Voorheesville, New York. Michaela works as a bookkeeper, biller, and payroll supervisor for a medical practice, while Seth is employed in the New York State Department of Taxation and Finance. They still find time to do fun things together (like explore Howe Caverns, where the accompanying photo was taken by LC alumna Lindsay Gravina ’10), and they still look back on their time at Landmark College with fondness.

“Landmark College is a like a home to me,” Seth stated during the phone interview for this article.

Michaela, on another line, echoed her brother’s sentiment.