“I want this documentary to drive a dialogue of inclusion and understanding.”

Devon Flynnperrault ’09 has been interested in making movies ever since he discovered his father’s camcorder as a young boy growing up in northern California. So it’s no surprise that his favorite memory from his time at Landmark College was a filmmaking class with Professor Humberto Ramirez.

“One of our assignments was to do a documentary film. But I asked if we could do a mockumentary and he said that was fine,” recalled Devon, who is now a video editor living in Brooklyn, New York. “So we studied the basics of making a documentary and I just did a parody version; which I found to be a lot of fun because I was interested in both.”

Devon’s experience making “Terror Hunters”—a film about ghost-hunters who were really bad at their job—taught him that sometimes it’s okay to bend the rules to get the results you want. His upcoming project, a documentary about Special Olympics athletes, has a similar intent.

“Too often is this community simply just the subjects; they should have the opportunity to be the filmmakers themselves,” Devon wrote on the GoFundMe page for his Untitled Special Olympics Documentary. While he and a small crew will take the lead in operating the camera and sound equipment, he wants to solicit as much input as possible from the athletes on how their stories should be told. The final product will include a behind-the-scenes featurette that illustrates this dynamic. 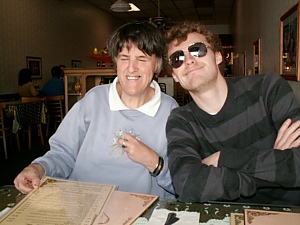 Special Olympics is near and dear to Devon’s family. His Aunt Becky has been competing since before he was born; first as a swimmer, and now, in her 60s, in track and field events. “She was actually a very accomplished swimmer,” says Devon. “Now it’s more of a social thing for her.”

Watching her compete inspired Devon to get certified as a Special Olympics volunteer at an early age, which evolved into coaching when he reached adulthood. It was shortly after getting his Associate of Arts at LC that he met a long-distance runner named Kenny, who he says will be the kicking off point for the documentary.

“People in our society don’t know how to interact with people with intellectual disabilities, and rather than trying to learn they simply shun them,” wrote Devon. “I want this documentary to drive a dialogue of inclusion and understanding.”

Devon writes more about his aunt and Special Olympics on his Medium.com blog. You’ll be able to follow along with his filmmaking project there, too, when he starts shooting in January, 2018