“As pioneers, we all were taking risks those first few years. As students, together we had finally found a place that understood us.” 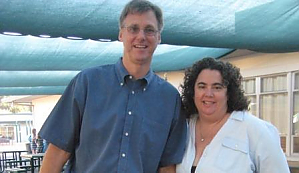 Over the years, we have heard of an overwhelming number of alumni finding their “partner for life” because of Landmark College. But Doug and Kristin Killin could officially be our first Landmark College Alumni Couple.

Doug and Kristin met when the doors first opened at Landmark College in 1985. At their graduation, both received the President’s Award, recognizing them as students who had best exemplified the College’s guiding principles. Together they left Landmark in June 1987 and attended Seattle Pacific University. Kristin earned a B.A. in History from Seattle Pacific but Doug returned to Landmark as a Resident Dean and earned a degree at Keene State College. Doug later earned a Master’s in Education at the University of San Francisco. They married October 30, 1993. Today, they live happily in San Jose, California, with their three children.

“It’s hard to believe it’s been 20 years this month!” Kristin shared during a recent phone interview with Tricia Stanley, Associate Director of Alumni Relations at Landmark College. “Doug and I officially met in April 1986 during Mr. Godfrey’s geology class, but in a sense we all met at school at the same time.” With only 75 students, each with dyslexia, coming from all over the country, there was a surreal nature to the first year the doors were opened at Landmark College.”

Kristin credits not only common interests but also having a common group as the most powerful factor during her semesters at Landmark College. “As pioneers, we all were taking risks those first few years. As students, together we had finally found a place that understood us.”

Like many couples who stick together, Kristin and Doug’s love grew out of their friendship. “We like to say friendship is the cornerstone of our relationship. Other than a few bumps in the road, we’ve been together pretty much the whole time,” shared Kristin.

Kristin wholeheartedly believes that Landmark played a huge role in their relationship. “As people with dyslexia, it was the first time ever we were with other people who thought as we did, that learned as we did and shared so many common experiences. We shared an openness and a willingness to connect with people, and to be honest. For some of us, the walls came down and we made lifelong connections.” 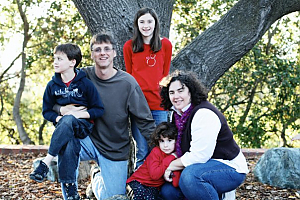 Whether founded in a sense of desperation or possibly the realization that this could be their last chance to go to college, Kristin recalls that most of her 74 classmates realized they all were in the same boat together. “Not only did we want to make Landmark successful, we wanted to be successful at Landmark College to prove all negative voices in our heads—from our pasts and in education—wrong!”

Doug and Kristin studied a lot. “We took what the teachers said to heart, and we implemented the study skills that were shared with us. We worked the master notebook and we worked one-on-one with the faculty.”

In Kristin’s opinion, Landmark still plays an important role in who she and Doug are as parents and as a couple. “Doug and I parent the same way, which I think comes from being more metacognitive in our own learning. It hasn’t always been easy, but I think we view it similar to how we did while we were at Landmark.”

Doug and Kristin’s experiences at Landmark College, and in life, have also fostered tolerance. “We’ve taught our kids to embrace their differences that make each of them who they are and to accept and cherish themselves first. Even if it’s frustrating at times, we have tried to instill confidence and a willingness to accept themselves and others. We want our kids to never let a teacher make them feel less than who they are, just because they’re not the best spellers.”