No Longer Sitting on the Sidelines: Scout MacEachron ’12

“I graduated from Landmark feeling as if I had a place in the world and things to contribute. Landmark College changed my life. I wasn’t just someone sitting on the sidelines anymore.” 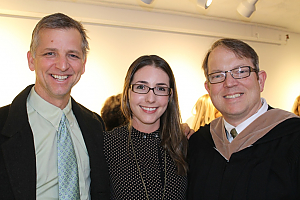 These are just some of the powerful words Landmark College alumna Scout MacEachron ’12 shared with new students in January 2015, when she was the keynote speaker at convocation. It was an invaluable opportunity for Scout to come back and give back to Landmark College’s newest Sharks.

After graduating from Landmark in Spring 2012 with her associate degree, Scout transferred to Barnard College (Columbia University) in New York City, earning her B.A. in December 2014. Soon after, she was hired as an assistant producer by NBC News.

Scout discovered her passion for journalism while she was a student at Landmark College, She participated in theater, athletics, volunteer work, and The Independent, our student newspaper, of which she was executive editor. Scout also wrote and took photographs for the Brattleboro Commons. This, combined with her work on campus, cemented her desire for a career in journalism. Since moving to New York, Scout has interned at Education Update (founded by Pola Rosen, a former member of the Landmark College Board of Trustees), Good Housekeeping, Rolling Stone, and NBC’s Broadcast News division (“NBC Nightly News” and “Dateline”). She works part time for Electric Yolk Media, a Brooklyn-based production company, and writes for various blogs and websites.

This is the story Scout shared with new Landmark College students at convocation in January 2015:

“I remember sitting where you are, watching some Landmark alumni I didn’t know give this speech. I was thinking two things. The first was ‘Cue the inspirational speech.’ And the second was, ‘That’ll be me some day…’ I was right, on both counts!

The reason I’m up here, the reason I just graduated from college after seven years of trying, and the reason I’m pursuing a career I love is because of hard… you thought I was going to say hard work, didn’t you? I bet that your whole life people have told you all it takes to succeed is hard work, right? Getting bad grades? Can’t find a job? Work harder. Well you know what—that’s B.S. It takes a lot more than hard work. The reason I’m up here, the real reason, is because this place taught me how to believe in myself. I left Landmark feeling like I had a place the world. I had things to contribute. I wasn’t just someone sitting on the sidelines anymore.

If you let it, Landmark will do that for you too. A lot of us come here from a place where we’ve been told that we’re not good enough. We’re failures. We’re stupid. We’re lazy. We’re a lost cause. That’s not true—and even if you don’t believe that about yourself now, you will. No matter how you imagine yourself 20 years from now—a video game creator, a journalist, a chef—whatever it is you see when you fantasize about your future, this is where it starts.

Look around. The people sitting here with you—the teachers, administrators, staff—they already believe in you, and they don’t even know you. They chose to be here, and it’s not just that they love rural Vermont. They believe in people like us, people with LDs, people who learn differently, people who go through life on a different schedule than everyone else, and that’s why they’re here. You are going to meet some of the most amazing and supportive people in the world. Don’t push them away.

The first key to succeeding here is accepting help, even if you don’t want it or don’t think you need it. Whether that help comes in the form of an advisor, a professor, a study group, office hours, even a trip to the DCAS, take it. Slowly you’ll learn. And you’ll start to realize that you can do the things you didn’t think you could. And that you’re worth the time and work it takes to do them. It can be really hard to want to succeed if you don’t think you deserve it. Which is why as important as the skills you’re going to learn are, what you’ll feel because of having them is more important. That’s confidence.

I discovered my passion for journalism here, and I’ve had countless friends discover what it is they want to do while here. I don’t think that’s just a coincidence. It’s almost impossible to figure out what you love and what you want to do when you think your options are limited by what you can and can’t do. Landmark will give you the skills and the support you need to realize that you can do anything.

There are going to be distractions—this is a college, after all. But don’t let those things distract you so much that you forget what this place can offer you. This is your chance. You will never find yourself in a place like this again. I guarantee you that. You will never be surrounded by peers who truly understand what you’ve gone through and teachers that truly believe in you. Don’t waste that. Because it’s simply not fair to yourself. You deserve this. Enjoy it.

Landmark changed my life, and it will change yours if you let it.”