“I picked up a lot of skills at LC that helped me learn how to deal with patients.”

The old saying, “He’s got blood,” once was used to convey a bold attitude and the courage to embark on a possibly dangerous adventure.

While that phrase could apply to many Landmark College students who have faced seemingly insurmountable challenges, for James Stockwell ’14, its meaning is both literal and metaphorical.

After earning his Associate of Science in Life Sciences from LC, James enrolled in the health sciences program at Franklin Pierce University in Rindge, New Hampshire. He graduated with a bachelor of science in May 2016; and began working as a phlebotomist at Dartmouth-Hitchcock Medical Center in Lebanon, New Hampshire, the following fall. He has since been accepted into the Center’s surgical technologist certification program. 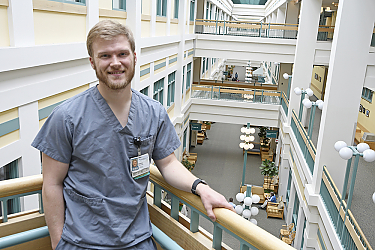 “The work phlebotomists do gives doctors added insight into their patients’ health, helping them see what’s happening inside the body,” says James.

Stress is inherent in almost any medical position, but Stockwell says his eyes were opened when he started his position.

“It’s intense and demanding, because I’m drawing blood at all times of day, and dealing with patients who are usually very sick,” the New London, New Hampshire native says. The skills he learned at Landmark College help him deal with the stress that’s a natural part of his job.

“During my shift there are only two of us on duty, so good time management skills and the ability to keep cool are essential,” he says. “When you’re very stressed, you still have to have excellent bedside manner to help put your patients at ease.”

James came to LC after attending New Hampshire Technical Institute in Concord, and deciding on a career in the sciences. He enrolled in LC’s Life Sciences program, finding inspiration from science faculty members like Kim Coleman, Cindy Tolman, and Abigail Littlefield, who, he says “had a major impact on my success.” 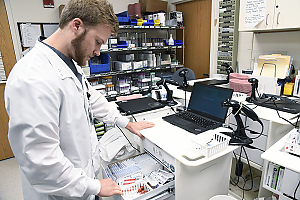 “At Landmark, the faculty seemed more dedicated than at the average college,” James says. “Instructors pushed us but they encouraged us in our strengths, and they taught us to engage our weaknesses in order to strengthen them.”

James worked as an R.A. while he was a student here, and on summer breaks from Franklin Pierce, he returned to work in LC’s High School Summer Program. He believes those experiences also helped prepare him for his current role at Dartmouth-Hitchcock.

“I learned how to ease students’ minds, and I picked up a lot of skills that helped me learn how to deal with patients,” he says.