“Knowledge on its own is not power. Knowledge, however, becomes powerful when it is applied.” 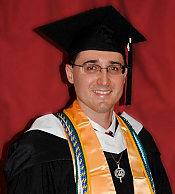 Like most Landmark College students and alums, I had a rocky academic road that eventually led me to Landmark. When I graduated, I was certain about several things. I felt that I had made the most of my time at Landmark. I had re-learned how to learn. Finally, I knew that I wanted to take my academic experience further—Landmark was (and is) the springboard to all that I have accomplished since then.

In addition to earning an A.A. from Landmark, I earned a B.A. from Hobart College. With sheer determination refined at Landmark, I put myself through graduate school on scholarships. I earned my M.A. from the University of Houston-Clear Lake. Today, I am a doctoral student of sociology at Texas A&M University.

How Landmark Helped Me

Very simply, Landmark gave me my life back. I learned why and how I processed the world around me. This explained why I had experienced certain academic and social successes and certain academic and social pitfalls. Landmark opened up a world to me that had been previously closed off. I knew that there was much of our human past—whose sacredness was expressed through literature, the arts, the sciences, philosophy, religion, and mathematics—that was dangling in front of me like a carrot, yet was beyond my reach. I also knew that my cognitive horizon was relatively limited, and that Landmark was the means to expanding my horizon by making these sacred vehicles of knowledge accessible and within my reach.

In this way, Landmark helped me to understand that knowledge on its own is not power. Knowledge, however, becomes powerful when it is applied. Landmark refined my ability to continually seek out and apply knowledge, while also paving the way for new knowledge.

Do not give up, and never quit. This advice is perhaps simpler said than done. It is, however, much easier to achieve than you might think. I have three reasons for believing this. First, goals should be SMART (Specific, Measurable, Attainable, Realistic, and Timely). Second, I believe that it is not a matter of “I will believe it when I see it.” Instead, I believe that “When I believe it, then I see it.” Third, by virtue of the first two points, quitting is not an option. It is better to walk away from something having given it your best effort than it is to forego the opportunity to do something in the first place. By setting out to do something, you set in motion a series of forces that can gain momentum and bring you closer to your goal.

Whatever you do, do not give up, and never quit.