"Others have to read books to find out what an LD is. I am the LD."

For a guy who began his professional baseball career this summer – and became a viral internet sensation this spring after top MLB pitcher Chris Sale gave him some impromptu private coaching at Fenway Park – Patrick McKenna ’14 is awfully humble.

Maybe that’s because he’s seen his share of adversity on the field and in the classroom. Disappointment (including a recurring injury that has postponed his professional career, for now) not only made him work harder for everything he has gained but gave him an appreciation for those who helped him along the way. 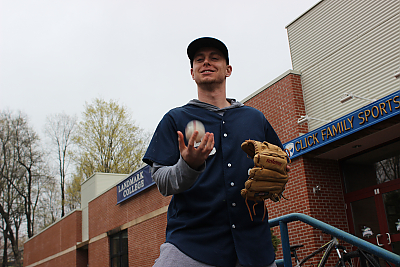 The West Roxbury, Massachusetts, native talks about Landmark College as if it’s his second home. He speaks admiringly of his LC mentor, Coach John Wood, and of the faculty members who helped him break down learning barriers. With their help, he overcame a sixth-grade reading level and graduated from LC with a 3.0 grade point average and an Associate of Arts in General Studies in 2014.

This spring not only saw the sidearm pitcher start playing professional baseball – he was recruited in April by the Roswell Invaders, part of the independent professional Pecos League, and was then picked up by the same league’s Bakersfield Train Robbers – but he also earned a bachelor’s degree in special education from Notre Dame College of Ohio in May, graduating with a 3.4 GPA. He wants nothing more than to help children with learning disabilities overcome the struggles he himself has faced.

And he is exceedingly polite for a 24-year-old.

“Mr. Baucom, could we get a picture together?” he called out to one of his most influential former LC professors, longtime faculty member Jim Baucom, during a recent return visit to campus.

These days, others are asking Patrick McKenna if they can have their picture taken with him. Recruited by the Invaders in April, Patrick became something of an internet star after sportswriter Sahadev Sharma tweeted a photo of him conferring with Sale, the pitching ace now playing for the Boston Red Sox, during batting practice at Fenway.

Sports is important to Patrick, and he has worked hard for athletic success. But he is clear-headed about his priority: devoting his career to teaching children with LD.

“No matter how far I make it in baseball, I want to be a symbol for someone with dyslexia or other learning challenges,” he said in a recent interview. “I want kids to look at me and see not just an athlete, but someone who worked his butt off to succeed. No matter what they want to go for – music, art, science, sports, whatever it is – I want to show them how to work hard and go for it.”

Patrick faced educational challenges familiar to many LC students – in his case, dyslexia that made school a daily ordeal. “I would come home and throw my book bag at the stairs every day because I was frustrated and exhausted from working so hard at school and still not doing well,” he says.

He and his parents discovered the High School Summer Program at LC, and he knew he wanted to enroll. By the time he graduated high school, and despite having the opportunity to attend a bigger university on a baseball scholarship, Patrick chose Landmark because “I knew I needed to be here.”

He captained the baseball and basketball teams during his time at LC, served as a resident assistant and a campus ambassador, and he began to excel in the classroom thanks to professors like Baucom, Eric Matte, and Steve Carmichael, who aided his academic and personal growth with memorization techniques, educational technology, and the self-confidence to tackle difficult tasks.

“Pat had every reason to hate being in my class: he had always struggled with writing, and I made him do a lot of it,” says Carmichael, assistant professor of English, who taught Patrick’s Developmental Writing class. “But he brought the same discipline to it that he brought to the athletic field—even though the latter was a lot more fun—and I think he understood, as an athlete, that learning the fundamental mechanics of the activity and practicing them, over and over, were keys to improvement and eventual mastery.”

Carmichael calls Patrick “the Big Papi of Landmark’s campus, the person who always had a spring in his step, a good word, a funny story, all delivered in that classic Boston accent.”

After LC, Patrick was recruited by the University of Oregon, but an injury during the summer led to another disappointment. His college baseball career on hold, he bypassed Oregon and enrolled at Notre Dame College of Ohio, where he excelled in the classroom but pitched in only one game.

Then, in 2016, Patrick attended the Sidearm Nation camp in Nashville, Tennessee, was encouraged to pursue his dream of a professional baseball career, and circulated a video of himself to 50 teams. His lack of college playing got an immediate “thumbs down” from many, but he got a few private tryouts from scouts who saw promise. One of those led to an offer from the Roswell Invaders.

“I got the offer to try out for the Invaders by email, three days after my grandpa died,” he recalls, “so I wasn’t even able to fully feel the joy in that moment.” Once again, though, he drew strength from the adversity he’d already experienced in his young life, and Patrick felt his beloved grandfather’s nudge as he went on to successfully try out for, and eventually sign a contract with, the Invaders.

He left for New Mexico shortly after graduating Notre Dame College in May, started playing for the Invaders, and eventually signed with the Train Robbers in Bakersfield, California, because the team saw him as a closer. He pitched three scoreless innings with the team and life was good. Adversity struck again, however, when he experienced a flareup of tightness in his arm that led the Train Robbers to release him. He maintains a positive, spiritual attitude, though.

“Everything happens for a reason, and I can’t be mad. I proved that I could pitch at this level and beyond. It’s just unfortunate that I got tightness in my arm at the wrong time.”

Persistence is a quality Patrick has in abundance. Refusing to let the latest obstacle derail his athletic aspirations, he pitched in front of a scout a few days later. “He told me I have a lot of raw talent and he promised he would help me develop into an MLB prospect,” Patrick said. “This is just another bump in the road. I’ve been in this position before and I know how to handle it. I’ll just keep working hard and everything will work out.”

Pursuing a professional baseball career is his current dream, but his long-term goal is to become a special education teacher and to motivate young children who are grappling with academic and personal difficulties. In his senior year at Notre Dame College, Patrick interned at an inner-city elementary school in Boston.

“I worked with kids who had a troubled home life, maybe with no mom or dad,” he says. “I want my experience to be with kids who don’t have all the advantages I had. I see so much drive in them but they haven’t been given the chance to succeed, and a lot of them don’t have anyone they can trust.”

In this case, Patrick knows his LD gives him an advantage other teachers don’t have.