“My favorite thing about Landmark is that it’s a small, close-knit community.”

Moving from the San Francisco Bay Area to Vermont to attend Landmark College had a profound impact on the career path of Alexandra “Ali” Williams ’11.

Accomplished at water polo, figure skating, and swimming in her hometown of Redwood City, California, Ali found the demands of college life in Vermont didn’t afford her the time or opportunity to indulge her athletic interests. So the once-aspiring marine biologist turned her career focus to nutrition. 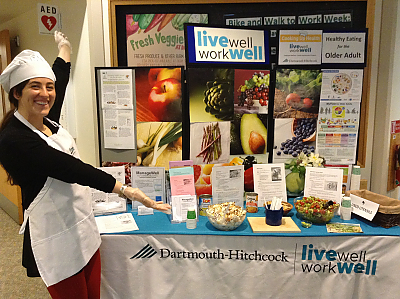 “I wasn’t able to do the same activities that I could do at home,” Ali says, “so I started realizing how important a person’s diet is to staying in shape.”

She initially came to LC’s High School Summer Program after her mom researched college prep programs for students with LD. Diagnosed with dyslexia and auditory processing disorder, Ali had no hesitations about coming to Vermont to attend Landmark. She learned so much about educational technology and tools for classroom success during the high school program that “I knew I wanted to come back.” She enrolled as a full-time student in fall 2009.

After a year, Ali left LC and returned to California to enroll in community college. But she decided to return to Landmark.

She found her niche here academically, singling out professors like John Kipp, associate professor of English (and current chair of the English department) because “I hated English but he was really encouraging and helpful”; Jim Baucom, professor of education, because he “taught me about my LD and how to advocate for myself”; and Tom Hinckley, associate professor of natural science (and current chair of the Natural Science department), because his biology class fed her interest in marine biology.

She also became a campus leader as a resident assistant and vice president of the Phi Theta Kappa Honor Society.

After earning her associate of arts in general studies in 2011, Ali took a semester off college to teach English and work in an orphanage in Xian, China. She then enrolled in New York University, where she earned her bachelor of science in nutrition and dietetics. Now earning credits toward her master’s degree in nutrition from NYU, Ali has temporarily returned to New England. Her dietetic internship through Keene State College in New Hampshire included a practicum in winter 2017 at LC, where she advised students about nutritional health. She is finishing her clinical internship at Dartmouth-Hitchcock Medical Center in Lebanon, New Hampshire.

“I’m interning in DHMC’s nutrition department and working with various dietitians to learn about their specialties,” Ali says. “Seeing how different diets can help make the symptoms of a disease better and help people become healthier has been eye-opening.”

Ali will return to NYU this fall to complete her master’s degree, but she maintains strong ties to LC: she participated in the College’s oral history project and in January 2017, she served as a guest speaker at the convocation ceremony welcoming new students.

“My favorite thing about Landmark is that it’s a small, close-knit community,” she told the incoming class—something this West Coast native discovered from day one at LC.