Jean Cherouny ’87 was an athlete and an artist from a young age. Growing up in Connecticut, she had a supportive family who encouraged her to become a “maker,” and she frequently created dolls, crafts, knittings, and woodworks with her friends and family.

She was an equestrian and a competitive skier in high school, believing she had a “downhill edge” if she simply continued to build her athletic prowess. 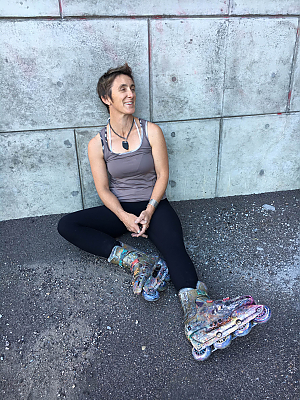 “I was a happy, oblivious child,” Cherouny says, “lucky to be able to use sports, art, and movement as a way of growing as a child.”

By young adulthood, though, things had gone downhill—but not in a good way. Cherouny raced competitively in Europe but realized she “wasn’t making it as a ski racer, and I needed help with academics. It was hard to leave an athletic career behind, but I needed to leave it behind.”

An education consultant referred Cherouny to Landmark College—then still a new, evolving college building its own identity—where she found tactics for dealing with executive function challenges. She was also able to thrive socially.

“People think of artists as being isolated and in their own world, but at Landmark there was no way I could be that,” Cherouny said during her Academic Speaker Series talk on campus March 6, 2017. “I loved people, and there were so many activities. Even in classes, we were working together to solve problems and make connections in our brains.”

Cherouny spent a year at LC, then went on to the University of Vermont, where she earned a bachelor’s degree in art and education. Later, she earned a master’s degree in fine arts from Johnson State College and is now an artist and member of the Generator makerspace in Burlington, Vermont.

“The methods that I primarily use include painting, digital, and drawing,” she says. “I employ an experimental process using my rollerblades directly on the canvas as a conduit to my emotions and body which allows me to externalize the ideas that were previously internalized.”

It’s only fitting that in adulthood, Cherouny has melded two of her primary interests and has become known for her rollerblade art. “Motion is always part of my work,” she says. “It’s how I perceive the world—I see motion everywhere. I still struggle with executive function, but it can help you to learn to trust that next step. Art evolves, and it requires you to take risks, dive in, and see where the next step leads you.”

Thirty years after attending LC, Cherouny is seeing her own strengths embodied in her two daughters: Anneke, 21, is a photographer currently attending the San Francisco Art Institute; and Abi, 17, is an Alpine ski racer entering her senior year of high school.

Cherouny, through her art, is still exploring ideas of identity, craftsmanship, and kinetic energy. Her artist’s statement at the Generator synthesizes her mission:

“Art worth looking at, worth owning, may look simple at first glance, but must be complex enough to invite a second glance, a third, a hundredth and become a part of our story. We have all had the experience of visiting a museum to encounter a painting. Maybe we have known for years from prints, reproductions or artifacts, that if we know it by heart so we can remember a story? We can look again, and see unexpected nuance, hidden detail, new forms of energy.”