Climbing An Sgurr, the highest peak on the Isle of Eigg

Today we planned to climb An Sgurr, which is Gaelic for “high sharp-pointed hill.” We have a good view of the Sgurr from the Glebe Barn where we are staying, and at first glance it looks quite intimidating — with its mile long, precipitous ridge line and its summit rising to over 1200 feet. The weather is quite changeable on Eigg, which can be somewhat unnerving at times; it can switch rather rapidly from periods of steady rain with gusting winds to clear blue skies with occasional patches of cloud. So when we first woke this morning and observed the wet grass, the ominous dark clouds, and the Sgurr surrounded by mist, we weren’t quite sure we were up to the task. As we left the safety of our surrounds at the Glebe, however, the fog started to lift, the sun began to emerge from behind the dark clouds, and we managed to muster the courage and determination to persist with our original plan. We were also spurred on in part by the knowledge that we had not been able to make it up into the black Cuillin mountains on the isle of Skye due to bad weather and poor visibility.

We began our ascent of the Sgurr with relatively clear skies and some sun — although the mist still hid the pinnacle of the Sgurr from view. We had terrific views out to the mountains on the neighboring island of Rum as we climbed up towards the peak, but the closer we got to the summit, the more these views were obscured by a thick layer of mist, which never really subsided. It was quite a scramble up the last stretch of the mountain through the mist, but we soldiered on in spite of the harsh walking conditions. Although we were unable to savor the spectacular views from the summit over the northern part of Eigg to the Isle of Skye, we still took some pride in having conquered the Sgurr… 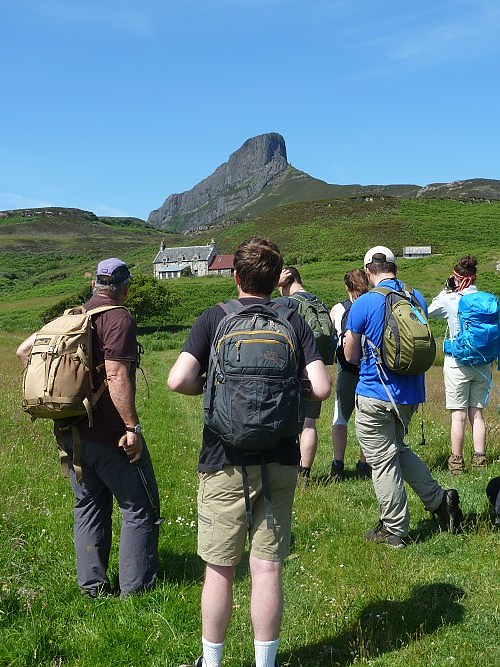 Psyching ourselves up for the climb the day before (wasn’t particularly appealing to us in the heat).... 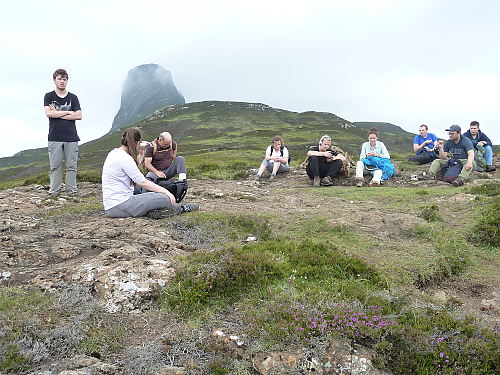 Half way up An Sgurr the next day-- with the peak of the Sgurr, with mist swirling around it, in the background 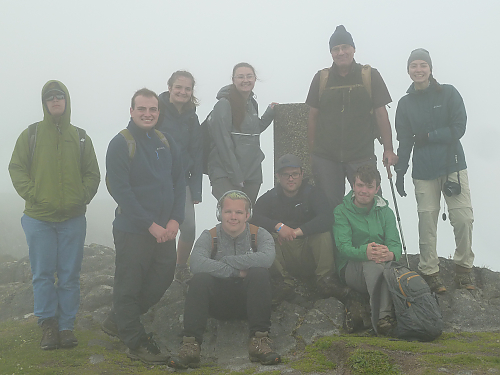 From the summit of An Sgurr. Go Team Scotland!