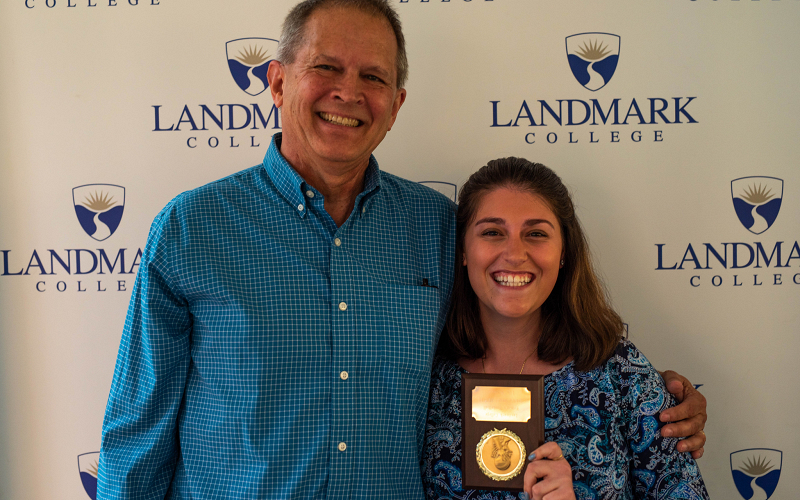 The 2018 Athletic Awards Ceremony, held on May 9th, honored the performances and achievements of more than 70 student athletes who participated in athletics at Landmark College this year, 18 of whom received individual awards recognizing their accomplishments.

Landmark College alumnus Kurt Wagenbach (‘98), a marathoner, ironman triathlete, and retired Vermont State Police detective, took the podium for the keynote speech, telling current student athletes about how he discovered running at Landmark College when a fellow student, now his wife, Katherine, asked him to go for a run, and sharing the story of his first marathon with former Landmark College professor Rick Matte. “Running was my secret weapon,” Kurt told the audience. “It made my body feel good, and it made my brain feel good. It also appeared to make my brain work much better, as far as school work was concerned.” Kurt and Katherine still live in Putney, and have two children together, their sons Kemp and Kole.

Following Kurt, each coach presented team awards, honoring student athletes in each sport with Most Valuable, Most Improved, and Coaches’ Awards, and in some cases special awards honoring the unique contributions of additional athletes. After, four individuals received overall awards for their accomplishments during the 2017-2018 athletic season.

Marques Marion, who plays both basketball and baseball for Landmark College, was named 2018 Male Athlete of the Year and also presented with the Jim Austin Integrity in Sports Award by baseball coach John Wood. Teammate Will Mauch, who participates in the same sports, received 2018 Scholar Athlete Award. Baseball player Gus Zarefsky took home the George Noble Dedication to Team Award, while Inna Broadbent, who plays softball and basketball, was named 2018 Female Athlete of the Year.