Save the Third Trilogy

Before I get started, I feel as though I should make something clear: I am not writing this out of a great, undying love for JJ Abrams, Rian Johnson or any of their Star Wars movies. I write this out of respect and protectiveness for the people who do love these films, who will love these films.

There are problems with this third trilogy. There’s how stupidly overpowered Rey and many other characters and devices are. There’s how Finn was treated, a black man who Disney, according to actor John Boyega (who, let’s be honest, is 100% right,) was kicked aside in the final movie, with all the other minority characters. Then there’s the corny simplification of morality that’s common in much of this era’s Star Wars products (though, to Abram’s and Johnson’s credit, not in their movies.)

Yet that is not everyone’s opinion. However, opinions like mine sadly seem to be driving marketing decisions in some ways. If you look at Fantasy Flight games, a physical game maker with the license to Star Wars, you’ll notice most of their Star Wars games take place before the battle of Endor. Of their two biggest Star Wars titles, (X-Wing 2nd edition, Legion, and Armada) only one, X-Wing, has any content related to the third trilogy. In comparison to other factions, this content is meager. The First Order has five expansions published, but no faction starter, making it unplayable for someone just starting. The Resistance has only four expansions, with a starter pack available for pre-order. Meanwhile, the Scum and Villainy “faction,” representing the various criminals in the Star Wars universe, has five expansions. Meanwhile, Wikipedia claims Marvel is making only one comic series that follows third trilogy characters. For any fan of the third trilogy, this could be disturbing. These are all strong signs Disney is abandoning this era.

Other people, some who have no love for the third trilogy but have little hatred, may express simple acceptance, but my mind turns back to my favorite Star Wars trilogy. The prequels.

Fifteen years ago, expressing my genuine opinion that Attack of the Clones was the best Star Wars movie ever made would have probably induced a cavalcade of Doug Walker wannabes to assault my prepubescent self with all the vitriol they could muster. But, like Luke Skywalker, I would still insist that there’s good in those movies. The infamous Episode One scrawl mentioning tax negotiations, instead of making me bored, subtly primed me to notice the greed of the villains. The hypocrisy and callousness of the Jedi towards young Anakin, instead of putting me off, made me recontextualize how Obi-Wan and Yoda treated Luke in the original trilogy. And Ian McDiarmid as the sly, manipulative Palpatine is a wonderful look at how a democracy becomes that other form of government that starts with d. Of course, this is just the hindsight (and potential justification) of a twenty-six-year-old. The six-year-old me who saw The Phantom Menace on VHS just thought the battle droids were cool, and kept having his mind blown by each successive movie.

But this isn’t about the prequels. Not only are there more articulate defenses of them, there also isn’t a need for anyone to defend them. Thousands, potentially millions of people my generation, have seen those movies and love them like I do and are at an age where they can defend their opinions in any way they see fit. What I’m more concerned with is the six-year-old who has just finished watching The Force Awakens, and, like Luke Skywalker with Darth Vader, like a young Siskel and Ebert with the original trilogy, like me with the prequels, has seen the good in something others think is unsalvageable. Something they love.

And I can see why this six-year-old would love these movies. There are some powerful images. A stormtrooper taking off his helmet after massacring innocents to reveal a scared young black man about to become a freedom fighter. That same black man and a young woman picking up Anakin’s lightsaber like a metaphorical torch, something most associated with white men. The idea that heroes could come from nowhere. That genetics aren’t destiny. Also, there’s this giant laser shotgun that destroys entire planets, which, they argue, is awesome.

While I could personally say most of those things could be expressed better (and that planet-destroying laser shotguns are dumb, actually) and be speaking from my heart, it is more useful to speak from that other part of my heart. The part that breaks for these new fans that may have their favorite characters and moments pushed to the side because they aren’t profitable. I know that this type of suffering is almost comically insignificant compared to some of the other things going on. The young girl inspired by Rey and the young black child inspired by F 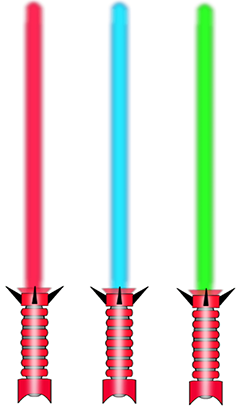 inn are facing existential threats in the real world. But strangers saying that they are dumb and wrong for liking the bad part(s) of the super important space wizards movie feels unnecessary, especially if we can sadistically point to the giant corporation memory-holing those particular parts and say, “See? Even the corporation says it is bad!”

I don’t have any action we can take, though. Except for one.

When a fan of these movies comes to you and says, “there’s good in these movies, I can feel it,” don’t judge them. Accept them as a fellow Star Wars fan.