NOTE: Components of this article are also being published as part of the Routledge Encyclopedia of Education

Attention Deficit Hyperactivity Disorder (ADHD) is a group of neurobehavioral disorders resulting in developmentally inappropriate self-regulation of attention, impulsivity, and hyperactivity (Beard, 2017). The defining characteristic of students with ADHD is inattention, difficulty with concentration and focus, often accompanied by hyperactivity and impulsivity, usually manifested in multiple settings.

More often than not, ADHD co-occurs with other disorders, including specific learning disorders (25%), anxiety and obsessive-compulsive disorders (25%), depressive disorders (35%) and autism spectrum disorders (67%) (Davis & Kollins; 2012; Beard, 2017). Comprehensive intervention or supports for ADHD, usually involve a portfolio of approaches, and is customized to the unique manifestations and symptomologies of the individual following a neuropsychological evaluation. Environmental context is important; in the case of younger children, the family is part of the support system, while in the case of college students and adults, ADHD coaching play a significant role.

Supports for ADHD broadly fall into four categories: (1) Pharmacological; (2) Educational; (3) Psychosocial; and (4) Behavioral. Pharmacological intervention covers the gamut of stimulant medications used to treat symptoms of ADHD. Educational supports include academic accommodations as identified in an Individualized Education Plan (IEP), 504 Plan and/or by the Americans with Disabilities Act (ADA). A common psychosocial support is Cognitive Behavior Therapy (CBT) which is a type of mental health counseling directed towards self-critical thoughts of individuals with ADHD and helps individuals reorient their thinking, thereby change behavior. Another very frequently used psychosocial support for individuals with ADHD is coaching. Behavioral supports for individuals with ADHD addresses a range of behavior modification techniques, strategies, and tools for managing distraction, time on task, and a host of executive function challenges including time management, self-regulation, prioritizing and organizing.

Supports for ADHD are effective when they address “current” functional limitations and are personalized to the individual and the environmental context, whether it is the classroom or the workplace. Supports must recognize the developmental nature of ADHD and the influence of related symptomologies such as stress and anxiety, episodic and chronic depression and self-sabotaging behaviors. A comprehensive support plan should also consider the side effects of medication, which can change as the individual goes from childhood to puberty to adult.

Specific ADHD support information for different audiences such as parents, students, working adults and so on, can be found on several national organizations such as Children and Adults with Attention Deficit Hyperactivity Disorder (CHADD); Attention Deficit Disorder Association; Understood.org; LD Online; ADDitude; and multiple blogs and discussion forums.

The numbers of students with ADHD and co-morbid disorders has been increasing steadily over time. The Government Accountability Office (GAO, 2009) notes that between 2000 and 2008, U.S. college students who indicated that they have ADHD increased from 6.7 percent to 19.1 percent. And based on parent survey report and child healthcare claims, the CDC in 2016 reported that the estimated number of children and adolescents ever diagnosed with ADHD was 6.1 million. Given these numbers, supports for ADHD are growing. The following section discusses some of the highlights of each broad category of support for ADHD, namely, Pharmacological; Educational; Psychosocial; and Behavioral.

Stimulants have long been the traditional medication for addressing ADHD symptoms. Stimulants include methylphenidates such as Ritalin, Concerta, Daytrana and Metadate, as well as, dextroamphetamines and amphetamines such as Adderall and Dexedrine. Strattera (atomoxetine), a non-stimulant medication is sometimes prescribed for individuals with ADHD and depression and anxiety. Vyvanse (lisdexamfetamine dimesylate) is long lasting amphetamine and is often preferred because it is consistent and provides symptom support for up to 14 hours.

It is important to note that not all individuals with ADHD need medication and any medication must be prescribed and monitored by a qualified physician. DuPaul et al., (2012) studied the effects of Vyvanse on college students with ADHD and found that while the medication was effective in reducing some of the symptoms of ADHD, the symptoms were still significant compared to the control group. Efficacy research on ADHD medication is more robust for younger children compared to adults and young adults. Research on the effectiveness of medication intervention for the young adult and adult ADHD population is sparse (D’Alessio & Banerjee, 2015). The Child Mind Institute website on ADHD notes that there is an 80 percent chance that someone with a diagnosis of ADHD will indeed respond to medication. About 50 percent of these respond equally well to methylphenidate or amphetamines, and of the other 50 percent, about half respond better to methylphenidates, and the other half to amphetamines. While medication can control for the symptoms of ADHD, there can be side effects of medication. Side effects can include poor sleep, loss of appetite, irritability and moodiness, highs and lows with energy and fatigue, especially when the medication wears off. Individual response to medication and side effects are varied, hence the need to carefully monitor and regulate the medication. Self-regulation of ADHD medication is strongly discouraged.

Accommodations can be used to address distractibility, losing one’s train of thought, short attention span, and difficulty with focus and concentration. Academic accommodations are alternations and/or changes to the space, time, materials, and setting of any academic task to enable the individual with ADHD to compensate for the functional limitations of the disorder and level the playing field, so to speak.

Accommodations, especially at the postsecondary level or the workplace, must be designed so as to not change any essential requirements of the academic task or technical standards. Typical academic accommodations for ADHD can include taking tests in a distraction reduced room, breaks during an exam, extended time on timed tests, use of a note taker for large classroom lectures, sitting in the front of the class (preferential seating), and so on.

Scaffolds or technology-based supports are often used to manage symptoms related to executive function difficulties among individuals with ADHD, such as digital calendars, organizers, planners, timers and alarms, and software/apps which help reduce distractions by blocking sites on the internet, while the individual is working on a task. Some of these distraction reducing software/apps are:

It is important to note that these scaffolds and tech-based supports by themselves do not change ADHD symptoms; the individual has to be ready to commit to effectively using these supports as needed.

Two of the best known psychosocial supports for individuals with ADHD are ADHD coaching and Cognitive Behavior Therapy (CBT). Coaching is widely recognized as an effective support for ADHD and is distinct from tutoring and learning strategies intervention. Coaching is a partnership between the individual and the coach, where both are jointly engaged in goal-setting, decision making, action steps, and accountability. It is an inquiry-based approach grounded in facilitating action towards achievement of one’s stated goals in a self-determined manner and feeling ownership for actions and consequences. Open-ended questions are used by the coach to elicit individual responses and through this process engage the individual in self-regulatory behavior towards a desired goal (Parker, Hoffman, Sawilowsky, & Rolands, 2011). During this process, a coach may identify and address barriers and facilitators for goal attainment (Quinn, Ratey, & Maitland, 2000). For example, coaching support can address a situation where a student is stuck in a loop of starting a project but rarely finishing it. 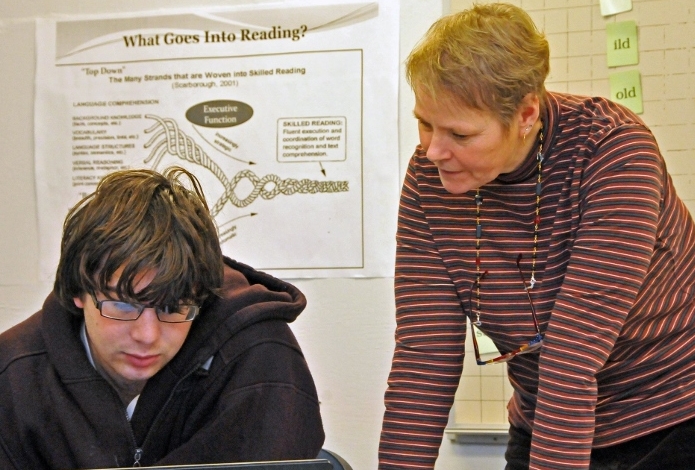 Another psychosocial approach that is sometimes used for individuals with ADHD is CBT. CBT is a type of mental health counseling which addresses self-critical thoughts of individuals with ADHD to reorient one’s thinking, and thereby change behavior (Ramsay & Rostain, 2006). The focus of CBT is reframing challenges that are “here and now,” i.e., current, rather than addressing past events and/or what is subconscious. CBT helps address many of the co-morbid symptoms associated with ADHD, such as anxiety and depressive thought about self.

Behavioral supports for ADHD symptoms are many and varied. As the name implies, behavioral supports are based on principles of behavior modification. Reinforcement of desired behavior is one example of this type of support. Reinforcement can occur through verbal praise. Focus should be on what the individual did which was praiseworthy, and not the individual or the outcome. Feedback is best when it occurs at the “point of performance” (Barkley, 2008, in other words, right when the student has engaged in a certain behavior. For example, it is better to give a student feedback right when she is being a distraction to peers, rather than waiting to talk to her after class. Another behavioral support is to provide manipulatives, such as a scribble pad and pen, a stress ball, or fidget gadget that the individual can physical manipulate to help him focus. Opportunity for movement is a well-known support strategy for individuals with ADHD. Other supports include creating antecedents for desired behaviors, such as sitting in a distraction reduced space, having white noise in the background while working, including music, and taking breaks while working. Having a routine is also helpful. For students, this means a routine for study time and play/leisure time, with built-in rewards for follow through.

D’Alessio, K. A., & Banerjee, M. (2016). Academic Advising as an Intervention for College Students with ADHD. Journal of Postsecondary Education and Disability, 29(2), 109 – 121. Retrieved from https://www.ahead.org/uploads/publications/JPED/jped292/JPED%2029_2_FullDocument.pdf#page=6