Take a Walk: The Effects of Nature Exposure on Mood and Cognition 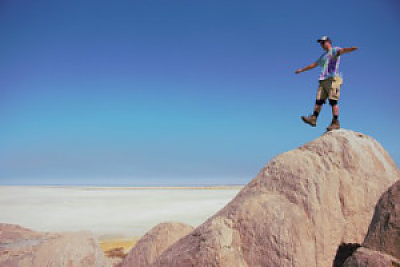 Students who learn differently (LD) typically report heightened anxiety levels and reduced well-being compared to their neuroatypical peers. Documented executive function challenges also abound among these students. Emerging evidence indicates that relatively brief exposures to nature can have beneficial effects on both mood and cognition (particularly executive function) as measured by self-report, behavioral, and physiological measures. In this article, we briefly review the evidence supporting the positive effects of nature exposure, as well as outline a pilot nature exposure project we are conducting at Landmark College with students who learn differently.

Philosophers, naturalists, and “ordinary” individuals have long espoused the restorative powers of spending time in natural environments. Anecdotal accounts of the benefits of spending time in nature include stress reduction, improved mood, increased spirituality, and enhanced thinking and reasoning abilities. Emerging evidence from diverse fields of environmental studies, urban planning, medicine, and cognitive psychology is providing empirical support for some of these long-held claims. Correlational studies have indicated simple but meaningful effects of proximity to nature. Merely having a view of nature from one’s home or office has been linked to higher ratings on measures of well-being (Bratman, Daily, Levy, & Gross, 2015; Kaplan, 2001). In another study, the presence of nearby nature attenuated the effects of stressful life events (such as family relocation) on children living in rural areas, as measured by both parental and child report, even after considering demographic variables, such as socioeconomic status (Wells & Evans, 2003). A recent meta-analysis concluded moderate, beneficial effects of nature interventions for increasing positive affect and smaller, but reliable, effects for lowering negative affect (McMahan & Estes, 2015).

Effects on Physiology and Cognition

Evidence of the beneficial effects of nature is not limited to self-report, as physiological proxies of stress have shown reduced responses such as reduced skin conductance, heart rate variability, and reduced cortisol levels after experiences in nature (as cited in Bratman, Daily, et al., 2015). Even viewing images of nature, compared to urban scenes, can have beneficial effects on the stress system following a mentally stressing task (Brown, Barton, & Gladwell, 2013). Neuroimaging evidence has shown a strong relationship between the degree of “urbanacity” of one’s upbringing and neural activity during a social stress task in a brain region associated with regulating stress and affect; in other words, growing up in a city is related to a more active stress response (Lederbogen et al., 2011).

Perhaps more surprising, recent research has demonstrated benefits to cognition following time spent in wooded and natural areas (McMahan & Estes, 2015). Of note, cognitive abilities related to the brain’s “executive function” networks have been examined. In a seminal study, Berman and colleagues (2008) tested 38 undergraduates on their mood and on their working memory capacity, before and after a 50-minute walk. Participants were randomly assigned to walk first in either an arboretum or in a downtown, urban setting, separated by one week. Working memory scores were higher after the nature walk compared to the urban walk, regardless of the order of the walks. Similarly, improvements were seen on inhibitory control and attentional filtering (Berman, Jonides, & Kaplan, 2008). Additional studies extended these findings by showing improvements in working memory and mood after a nature walk in individuals with major depressive disorder (Berman et al., 2012). Similarly a group taking a nature walk showed decreased anxiety, decreased rumination (the focused attention on one’s thoughts, typically the causes of one’s distress) and improved affect compared to a group taking an urban walk (Bratman, Daily, et al., 2015).

What are the mechanisms behind these improvements? In a follow-up to the Bratman et al. (2015) article, the authors found decreased rumination and decreased neural activity in an area associated with maladaptive self-referential thought after a nature walk (Bratman, Hamilton, Hahn, Daily, & Gross, 2015). This suggests nature may focus attention away from rumination and therefore its deleterious effects on well-being. A related theory, Attention Restoration Theory (ART), posits that urban environments tend to tax the top-down, resource demanding (“executive”) attentional system to filter relevant from irrelevant stimuli. In other words, urban environments tend to have a high degree of sensory stimulation that requires directed attention—loud, fast-moving cars, for example. The theory suggests continued exposure to urban contexts overtaxes the directed “executive” attention systems of the brain, depleting this limited cognitive resource. This in turn results in decreased cognitive ability for systems relying on executive attention, such as working memory. Natural environments, on the other hand, tend to stimulate bottom-up attentional systems, as they are “naturally” interesting and stimulating, thereby automatically capturing attention, and thus, less resource-demanding. The top-down directed attention systems are thus not taxed to the same degree in nature and thereby allow the resource-heavy executive attention systems time to replenish or refresh; this in turn could explain improved performance in high-demand cognitive tasks after nature exposure.

Studies employing individuals with learning difficulties have been limited, but promising. In one study, parents of 96 children with attention hyperactivity deficit disorder (ADHD) were surveyed about their children’s attentional functioning and ADHD symptomology after various leisure activities. Attention ratings were higher, and symptomology was lower, for outdoor activities compared to other activities (Taylor, Kuo, & Sullivan, 2001). The working memory capacity of 17 children, ages 7-12, with ADHD was tested after a walk in urban, neighborhood, or park settings. Performance was improved after the park walk compared to either of the other two settings (Taylor & Kuo, 2009). However, to our knowledge, no studies have examined the effects of a brief nature intervention in college-aged student who learn differently.

Given the limited amount of data on nature exposure in college students with learning differences, we are running a pilot study at Landmark College to test students’ perceived well-being, mood, and executive function ability before and after walks in urban versus natural settings. Little is known about the potential benefits of nature exposure to students with learning challenges, despite the potential positive benefits it may confer on students.

Our research questions for the project are as follows:

Nature exposure ‘interventions” hold potential as low-cost, low-resource strategies for improving student well-being and possibly academic success. Stay tuned for updates on our project! We hope the findings will help elucidate the efficacy and prospective benefits of nature exposure on students with learning differences.