In recent years, increased attention has been directed towards predictors of students’ learning outcomes. While curriculum, pedagogy, and cognitive abilities continue to 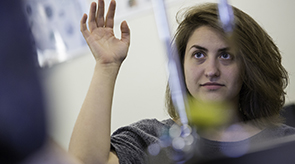 draw attention as important mediating factors in student success, students’ mindsets, that is, beliefs about themselves and their educational setting, have been shown to have a strong positive impact on outcomes (Yeager et al., 2013). The growth vs. fixed mindset paradigm, initially proposed by Carol Dweck in 2006, has spawned a rich research base and models of intervention for students in secondary and postsecondary settings. Simply described, students with a fixed mindset believe that their individual abilities and traits such as intelligence, personality, and skills are fixed parameters that are finite and unchangeable. Hence, any efforts to learn and improve are doomed to fail. Students with a growth mindset, on the other hand, subscribe to the notion that individual abilities and traits are malleable and can be changed. They believe in the power of effort and a positive definition of hard work. As reported by Yeager et al., “In this mindset, students respond more resiliently to challenges and show greater learning and achievement in the face of difficulty (p.2).”