Include Landmark College in Your Will

The Charles Drake Legacy Society is a prestigious group reserved for those generous Landmark College supporters who have chosen to include a gift to the College in their will or estate plans. There are many benefits to naming Landmark College in your will, but the benefit that matters most is the impact it will have on future generations. Legacy giving offers you a way to make a difference, far beyond the measure of your lifetime.

Check this Sample Language for Charitable Bequests document [pdf] for help with guidelines and specific legal language to include Landmark College in your will.

If you would like to discuss your deferred gift plans, please contact Carol Nardino at 802-387-6877 or cnardino@landmark.edu.

Through a deferred gift, you will help ensure that LC continues to change lives and help future generations of students thrive. To become a member of the Charles Drake Legacy Society you can choose to make provisions for Landmark College through:

Charles Drake, Ed.D., was a Harvard-trained educational pioneer who recognized the need for a college devoted to students who learn differently. Dr. Drake identified the campus of the former Windham College as a potential site and took bold steps to establish Landmark College as the premier college for students with LD. The College was incorporated by the State of Vermont in 1983 and opened its doors to students in 1985.

Despite severe dyslexia, Dr. Drake earned a bachelor’s degree in journalism, a master’s in divinity, and a doctorate in education. In 1971, Dr. Drake founded Landmark School in Beverly, Massachusetts, exclusively for students with learning disabilities. Its educational philosophy — and subsequently, that of Landmark College — grew largely out of Dr. Drake’s own struggle with dyslexia, as well as his education and research over several decades.

“We are here for the serious purpose of getting students to achieve their goals and to reach their skill level,” Dr. Drake said.

After years of battling with her public school system over accommodations for her learning disability, Genevieve (Friend) Land ’96 was excited to discover Landmark College. But the admissions office delivered some difficult news after reviewing her application: Genevieve was not ready for the rigors of college coursework.

Undaunted, she followed the recommendation to attend the Kildonan School’s college prep program. A year later, she had raised her grades to the level where Landmark College would accept her. “I tend to turn lemons into lemonade,” says Genevieve. “I made the best of everything, and my whole LC experience turned into a very sweet, delicious lemonade.”

Indeed, Genevieve says Landmark College was where she finally felt recognized as a learner who could achieve her fullest potential. In addition to the time management and organizational skills she acquired, Genevieve says her experience instilled her with confidence.

“Landmark taught me perseverance, to push through, try different ways, and to be assertive,” she says. Her assertiveness was tested during her time at Lake Erie College, where she earned her bachelor’s degree, and again in the Master of Science in Management program at Polytechnic Institute of New York University, where she graduated with honors.

Now residing in California, Genevieve is the co-founder of a nonprofit homeschool organization that works with educators to think outside the box and draw on real-life experiences. “My whole life revolves around the tools I learned at Landmark,” she says, adding that she also tries to impart the lessons she learned about active reading and organization to her three young children, Corina, Connor, and Chloe.

Genevieve remains involved with Landmark College by serving as secretary on the Alumni Advisory Board from 2009 - 2021, and she recently joined the Charles Drake Legacy Society by making the College a beneficiary in her Trust.

Genevieve says she hopes her planned gift will enable the College to continue expanding its mission.
“They need to constantly evolve in order to move forward and be successful in the future,” says Genevieve. “Leaving Landmark in my legacy not only shows what’s important to me in my life but what made me the person I am today.”

Rick Parton remembers being back on the Landmark College campus in 2016 for the opening of the Nicole Goodner MacFarlane Science, Technology & Innovation Center. Specifically, he remembers John Wood—the long-time resident dean and coach of many LC athletic teams— bounding up to greet him and his wife, Carol.

“He hugged me so hard he broke the sunglasses hanging around my neck,” laughs Rick. “Then he told us that even today, he tells his teams ‘the Jenny story,’ which is about her tenacity to want to learn.”

Jenny Parton’s tenacity was built over a lifetime of knowing she learned differently. Her parents were fortunate that their eastern Pennsylvania home was close to a private K-8 school that catered to children with learning and attention difficulties, and enrolled Jenny early on. Their public high school had a good special education program, and Carol says Jenny became very adept at advocating for the help she needed.

Just before her senior year of high school, they found Landmark College and sent Jenny there for a summer program in 1997. Working with her advisor, John Bagge, and others, Jenny improved her reading from a fourth-grade to seventh-grade level in just two months. Her parents were floored by the dramatic improvement. “Every step of the way, teachers said Jenny had a lock on her and they didn’t have the key. Landmark had the key,” Carol said.

Instead of returning for her senior year, Jenny applied and was accepted into the undergraduate program for the fall semester, which also allowed her to come into her own socially according to Rick. “All of a sudden everyone else was just like her,” he says.

Tragically, Jenny was killed in an automobile accident over Thanksgiving break in 1997. She went with a fellow Landmark College student to his hometown of Huntsville, Alabama, and an elderly driver entered the highway going in the wrong direction and hit them head on. The Partons were able to fly down there in time to spend the final hours of Jenny’s life with her.

“We say that she was soaring like an eagle,” says Carol. “When she died, she was at the highest point in her life. She was just flying away, having a great time and really happy.”

When the Partons came to campus to collect their daughter’s belongings, the College had organized a memorial event that included awarding an honorary degree to Jenny. “They didn’t have to do what they did; to walk into that auditorium and see all those students and teachers meant a lot to us,” Rick says of the gesture. Since that time, the Partons have been active supporters of Landmark College during Annual Fund campaigns. They are also members of the Charles Drake Legacy Society, through which they established a scholarship in Jenny’s name. Their dream is to have their estate gift endowed with enough money to give a full scholarship to deserving students.

“When we went up to Putney for the first time, we were so scared Jenny wasn’t going to get in. Now, I’d hate to know that the only reason a student couldn’t go to Landmark College was because they couldn’t afford it,” says Carol.

But the Partons’ most visible gift to the campus is Jenny’s Bench, located on the upper campus between Stone and Davis halls. Over the years, they have transformed that space from a wooden bench and tree to a lush flower garden with a majestic view of the southwestern mountain range.

“We wanted something that in our mind was about the future,” Rick says of the site. “And even though 99 percent of the kids that probably sit on that bench don’t know who Jenny was, all they have to do is talk to John Wood.” 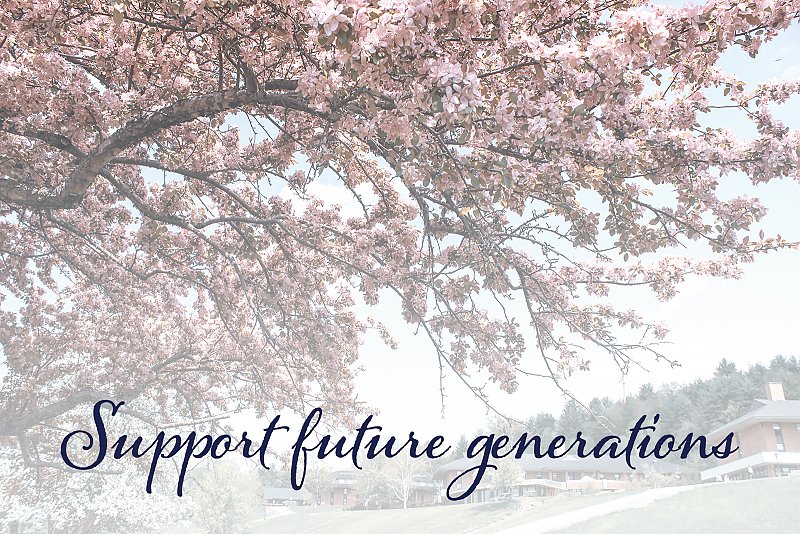