“Before coming to LC, I didn’t know how to start an essay, but I’ve learned so much vocabulary just from writing with teachers.” 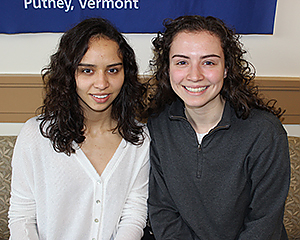 Ines and Mariana Borbon Bours were diagnosed with ADHD when they were ages 16 and 15, respectively. They say their mother decided to have them tested after watching them struggle in school more and more with each advancing year.

Getting a diagnosis was no small feat; Mariana and Ines traveled more than 1,000 miles south to visit with a psychiatrist in Mexico City. “He told us that the understanding of ADHD and learning disabilities wasn’t as advanced in Mexico,” Ines recalls. As a result, one of his recommendations to the family was for the sisters to go to school in the United States.

As teenagers who only knew the tight-knit community of their hometown, where they were surrounded by family members, the prospect of shipping off to another country was daunting. Mariana ended up leaving first, having finally become disillusioned by her high school’s lack of empathy and ability to provide the support she needed.

Mariana’s experience in a New York boarding school was such a balm that she began lobbying her older sister to join her. “I kept on calling her to tell her how much fun I was having and how much help the school was giving me. I was doing so well,” she says. Ines made the decision to transfer mid-year and her grades also improved. The two lived in the same dorm and — feeling liberated by the greater understanding about their ADHD — forged close friendships with many of their fellow students.

When it came time to choose a college, however, the sisters discovered another cultural difference between their native land and the U.S., where the array of choices was greater and the process of applying to schools was much more competitive. “We weren’t used to school in America, and we came when it was time to start thinking about college,” says Mariana. “Everything was overwhelming.”

The parent of one of Mariana’s friends told her about Landmark College. She visited the campus and liked that the small class sizes and rural campus would offer a similar environment as the boarding school. Ines first opted for a private college in New York, but quickly found its LD support services weren’t providing what she needed. She transferred to Landmark College after one semester.

Even though the sisters share the same ADHD diagnosis, their learning difference manifested in distinct ways. Mariana would get distracted in class and struggle with time management and organization, whereas the biggest challenges for Ines were with writing and language acquisition. Fortunately, they both found solutions at Landmark College that have helped them become good students.

For Mariana, the access to her teachers during office hours helped her stay focused. “I need the relationship with my professor to feel comfortable,” she says. “Just meeting with the teachers to talk about the class so I could understand it better, that’s really helped me.”

Ines has been a frequent visitor to the Drake Center for Academic Support (DCAS), where the staff has helped her devise strategies for writing. “Before I came to Landmark College, I didn’t know how to start an essay,” Ines says, adding that she feels the level of experience the DCAS staff has is a strength over her previous college. “but I’ve learned so much vocabulary just from writing with teachers, who also have a more extended vocabulary than the students who were helping me there.”

Both sisters credit LC for not only equipping them with tools and strategies to be successful students, but also for helping them acclimate to living and going to college in the United States. Each of them now has plans to venture forth with their studies,

“My goal at LC wasn’t to get a degree, but just to improve my writing,” says Ines, adding that she’s keeping her options open. “If I don’t get accepted where I want, I’ll stay here.”

Mariana plans to stay through next fall and the January term, at which time she’ll have earned her Associate of Arts in Liberal Studies. Like Ines, she’s well aware of what she’s leaving behind.