Economist Paul McCulley offered “A Civics Lesson for the Real World” as the keynote speaker at the first symposium of Landmark College’s Morgan Le Fay Center for Advances in Economics, Business, and Entrepreneurship Instruction, held Saturday, October 1, on LC’s campus.

McCulley’s address hit on themes of the uneasy alliance of democracy and capitalism – two governance systems existing in a “sacred, unholy marriage. They co-exist because they need each other.”

Democracy legitimizes capitalism by giving it “a credible rule of law,” while capitalism’s gift to democracy is one of efficiency. The determination of whether that marriage is a happy one or one in need of therapy is “whether it passes the smell test of justice and fairness.”

Peter Fisher, who is dyslexic, later led a discussion among Landmark College students about the difficulties they have faced in the educational system. He recounted his own background growing up with undiagnosed dyslexia and the anger issues it triggered in him as he struggled with schoolwork. LC students Mitchell Barrett, Elizabeth Bellingham, Ashlee Charette, Robert Lutz, and Jonathan Wallentine – all enrolled in the College’s Associate of Arts in Business degree program – participated in the discussion. 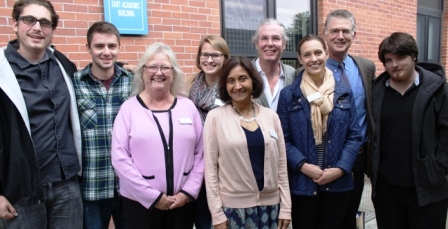 The Morgan Le Fay Center was endowed in 2014 by a $1 million gift from Paul McCulley, whose son Jonathan graduated from Landmark College the same year.