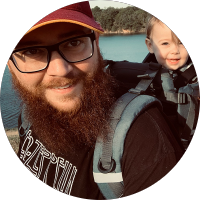 Dr. Gobel-Lynch (he/him) is the Director of Transition Programs at Landmark College. Eric earned his BA in History from Heidelberg University, his MA in Medieval Studies from Western Michigan University, and his PhD in Higher Education Leadership from TCU.

Academically, Dr. Gobel-Lynch's interests continue to include both Higher Education and the Middle Ages. The study of institutional identities, perceptions, and town/gown relations were central to his dissertation, while the Black Death and Baltic Crusades remain areas of interest in the medieval world. Eric has taught interdisciplinary courses in Medieval Studies and identity development as well as working with students as an academic coach, disability accommodations provider, tutor, supervisor, and Game Master.

In his personal life, Eric loves to hike, play video games and TableTop games, read, act, and spend time with his daughter. He is currently enjoying games like Total War: Rome II, Hades, Assassin's Creed, Jackbox, and Offworlders. Eric is also trying his hand at game design, and is working on his own TTRPG in the classic Medieval Fantasy genre.

Perceived and assumed identity of colleges and universities

Tabletop gaming as an academic and social support

The development of ethical and moral frameworks in individuals

The Black Death and the Flagellant movement

Ties between the Hanseatic League and the Teutonic Order