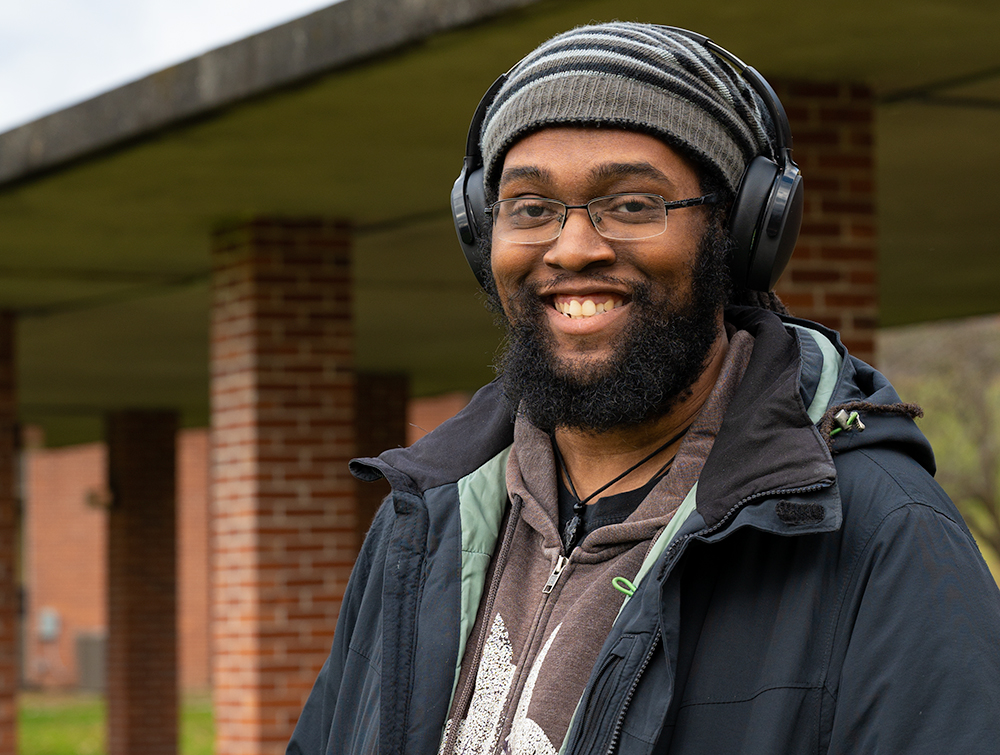 Anastasio Bonhomme is the 2021 recipient of the Landmark College-HollyRod Foundation Scholarship. The Maryland native enrolled at the start of the fall 2021 semester and the scholarship will cover his tuition in full while he pursues either an associate or bachelor’s degree at Landmark College.

Bonhomme (pictured right) was selected by a committee that included staff members from the Landmark College Office of Admissions, Landmark College President Dr. Peter Eden, and actor/activist Holly Robinson Peete, co-founder of the HollyRod Foundation. Selection criteria included academic ability and a demonstration of financial need for a student with autism.

For Anastasio’s mother, Nadja, the scholarship was a welcome surprise after the COVID-19 pandemic had impacted her ability to work as a personal chef. “I thought we were offered a good financial package at first. Then when they told us about the entire scope of the HollyRod Scholarship and what it was going to cover, I was sort of speechless and I think I'm still taking it in because that's an incredible gift,” said Nadja, who added that she has long-admired Holly Robinson Peete as an actress and knew of her philanthropic work inspired by Robinson Peete’s oldest son, RJ, who is autistic.

After being an honors student all the way through high school, Anastasio began to experience stress and anxiety around writing assignments during his first year at college. “I would start to panic and things would just spiral. I wouldn’t turn in an essay, then I wouldn't turn in my other assignments in that class, and then it spread to my other classes,” he remembered.

That cycle of inaction continued at two other colleges before the Bonhommes sought help from a psychologist and had testing done to diagnose Anastasio as being on the autism spectrum. Meanwhile, Nadja discovered Landmark, and the responsiveness of College’s staff was something that stood out from other schools they considered.

“Everyone was warm and embracing. It felt like they were listening to me,” Nadja said, recalling how her admissions counselor had put them in touch with an academic advisor even before her son was enrolled. “Landmark was trying to tell me that there was a place here for Anastasio and we welcome him. Hearing something like that, after we had other doors slammed on us, was unbelievable.”

That responsiveness and support from staff members has stood out to Anastasio as well. “It helps to be able to go down to the health center and have weekly meetings with my counselor. I've never had that before,” he said. Anastasio is also taking part in the Center for Diversity and Inclusion’s “Reach One, Teach One” mentoring program for African-American students and has joined the “Dungeon Delvers” role-playing game club.

Bonhomme is the second recipient of the Landmark College-HollyRod Foundation Scholarship, following Reece Rountree-Hanscom, who enrolled in 2018 and graduated with his Bachelor of Science in Computer Science this past spring. The collaboration between LC and Robinson Peete began after she received the LD Luminary Award during the College’s fundraising gala in 2016. The HollyRod Foundation was founded in 1997 by Robinson Peete and her husband, former NFL quarterback Rodney Peete, to support families affected by autism or Parkinson’s disease.