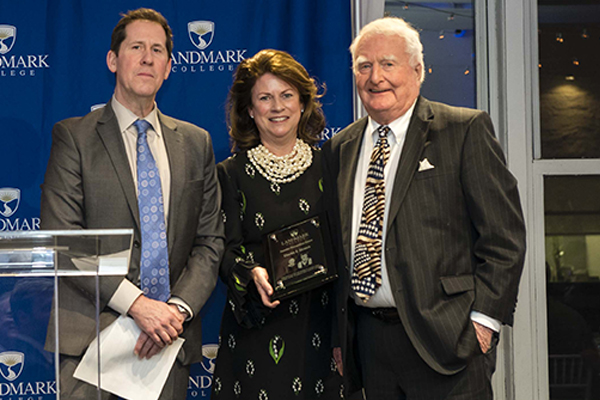 Landmark College (LC) has announced that it has received a $3 million gift from a private donor, which is the largest single donation in the College’s history. Charles Strauch (pictured far right), a founding trustee and longtime supporter of LC, made the donation on behalf of the Strauch family.

This donation from the Strauch family directly supports LC’s current fundraising effort, the Imagine Campaign, and brings the campaign’s current total to approximately $11 million. The Imagine Campaign’s primary focus areas are increasing student scholarships, growing the College’s endowment, and investing in strategic initiatives such as LC Online, satellite micro-campuses, career readiness, and more.  This historic gift will primarily focus on LC Online expansion and satellite program/site development similar to the current Bay Area Success Center in California.  However, as all LC programs are “One Landmark,” the support can benefit related needs and initiatives associated with Landmark’s Putney-based residential campus and program.

“This funding will provide the resources needed to intentionally strengthen LC’s reach as well as access for students, while replicating its program models of academic skill-building and social pragmatics support through LC Online,” said Dr. Peter Eden, president of Landmark College. “While we will always stay focused on our flagship campus in Vermont, LC has deliberately and tactically kept our residential program optimally sized while we simultaneously increased access for neurodiverse learners through our many LC Online offerings, as well as the Bay Area Success Center micro-campus.”

“The ideal college of the future will provide what students and families need and expect for learning, social experiences, and career immersion, but in online, in-person, and hybrid modalities,” said Dr. Eden. “LC will continue to deliver such, but as always engineered for students with dyslexia, ADHD, autism, executive function challenges, and other learning differences.”

As a founding trustee of Landmark College, Charles Strauch helped LC’s founder, Dr. Charles Drake, establish the College in 1985 at the former campus of Windham College. Strauch and his late wife, Nan, herself a former longtime LC trustee, have contributed to many College improvements over the decades, including the Strauch Family Student Center, Charles Drake Field, the Nicole MacFarlane Science, Technology & Innovation Center, and early LC Online start-up efforts.

Landmark College was established in 1985 as the first college for students with learning disabilities, primarily dyslexia. Since its founding, LC has expanded its student body to include a range of neurodiverse students with learning differences including ADHD, autism, and executive function challenges. It became a baccalaureate-granting college in 2012 and has since grown its bachelor’s and associate degree offerings, as well as LC Online programming, short-term summer programs, micro-campus initiatives, and professional development for educators and education professionals.

Photo: (From left to right): Landmark College President Dr. Peter Eden, Board of Trustees Chair Barbara Epifanio, and Trustee Emeritus Chuck Strauch posing for a photo at the 2022 More Than We Imagine gala.