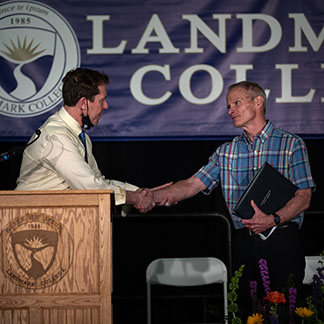 Landmark College conferred an honorary Doctorate of Humane Letters degree to Jim Baucom during a ceremony for retiring faculty and staff, held on Saturday, May 22, 2021 on the lower campus grounds.

Baucom was a full professor in the School of Education when he officially retired from teaching at the close of the Spring 2020 semester. He was appointed professor emeritus at that time, but plans for a formal ceremony honoring his accomplishments, as well as those of several retirees, had to be put on hold due to the COVID-19 pandemic.

“It is not hyperbole to state that we may not even be here right now if not for Jim Baucom,” current Landmark College President Dr. Peter Eden stated in a campus wide memo announcing Baucom’s appointment as Professor Emeritus last year. “The significant contributions Jim has made within the field of educational psychology and the life-changing effects it had upon students taking his courses are difficult to fully measure and completely appreciate.”

Baucom was recruited to join the Landmark College faculty in 1984 by its first president, Jim Olivier. The two were colleagues at the Landmark School in Beverly, Massachusetts. Baucom was appointed Academic Dean and tasked with building a curriculum and recruiting faculty.

“There were zero students signed up for Landmark College at that point,” Baucom recalled in an interview last summer for the College’s alumni publication, Landscape. “We worked from a little office at the Landmark School, and we had one old Radio Shack TRS-80 that we shared. I finished my career 35 years later, hunched over a laptop in my son’s old bedroom, teaching online classes. In some ways, my career spanned the whole tech progression.”

Baucom attended the University of North Carolina for his bachelor’s degree and later earned a Master’s in Education from the Harvard Graduate School of Education. He is the College’s fourth professor emeritus, joining Ken Gobbo, Linda Hecker and Robert Fay.

Photo Info: Dr. Peter Eden, president of Landmark College (left), shakes hands with professor emeritus Jim Baucom (right) after presenting him with an honorary Doctorate of Humane Letters degree during a faculty and staff retirement ceremony held on May 22, 2021. Baucom was a founding member of the College’s faculty and served as its first Academic Dean. He retired at the end of the Spring 2020 semester after a 35-year teaching career at the College. (Photo credit: Todd Miller)