Charles Ginnever Sculpture to be Installed on Campus

Landmark College announced its campus will be the new home for a large-scale sculpture created by renowned artist and local resident, Charles Ginnever.

The abstract, structural steel piece, 4 the 5th (of Beethoven), was commissioned by the Vermont State Council on the Arts in 1972, and has been on exhibit at the Southern Vermont Arts Center in Manchester. Dr. Peter Eden, President of Landmark College, has been working with SVAC Executive Director, Elizabeth Paxson, to coordinate its move to Putney, based on the artist’s request.

"We have enjoyed having 4 the 5th (of Beethoven) in our sculpture garden for many years and although we will miss the piece, we are happy that it has found a new home at Landmark College," said Paxson. 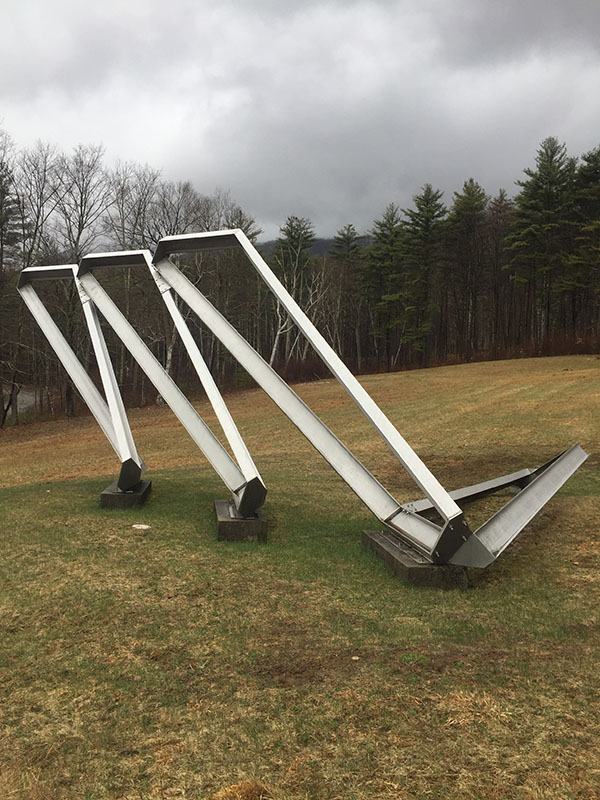 According to Ginnever’s web site, the sculpture (pictured right) is the only installation of his work in Vermont beyond what he displays on his own property. Eden said the College had identified a site for the sculpture on the upper campus and is hopeful it can be put in place this summer.

“This piece will be a tremendous addition to the College campus, as we continue to collect and display permanent and temporary works on our grounds and in our buildings,” said Eden. “We’re especially proud that this piece helps us honor our history, with Mr. Ginnever having been a faculty member when this campus was home to Windham College.”

Born in San Mateo, California in 1931, Ginnever had already established his place in the art world by the time he was named head of the Art Department at Windham College in the late 1960s. His stature in various abstract art movements of that period enabled him to invite fellow artists to create site-specific outdoor works on the campus that came to be known as “The Windham Show,” and is considered the first commissioned outdoor art exhibit in the United States.

Ginnever left his teaching post in 1975, right around the same time that he received a John Simon Guggenheim Fellowship and an individual artist’s grant from the National Endowment for the Arts. Since then, his work has been displayed in numerous solo exhibitions and remains part of the permanent collections for New York’s Metropolitan Museum of Art, the San Francisco Museum of Modern Art, the University of Houston, Texas, and the Australian National Gallery in Canberra, among others.

In 2007, the Vermont Arts Council honored Ginnever with its Walter Cerf Lifetime Achievement Award. He continues to make and exhibit new works on his farm in Westminster, Vermont.

“In a world that prizes signature styles and instant recognition, Ginnever slows down and challenges the viewer’s experience. He inculcates us with a nagging doubt, which becomes part of the pleasure of the work,” art critic John Yau wrote in a 2013 review of Ginnever’s “Rashomon” exhibit at the San Jose Institute of Contemporary Art.

​A dedication ceremony is scheduled for Friday, September 28 at 4:15 p.m.