Please check our Coronavirus Response page for the most up-to-date information about summer and fall sessions.
Giving 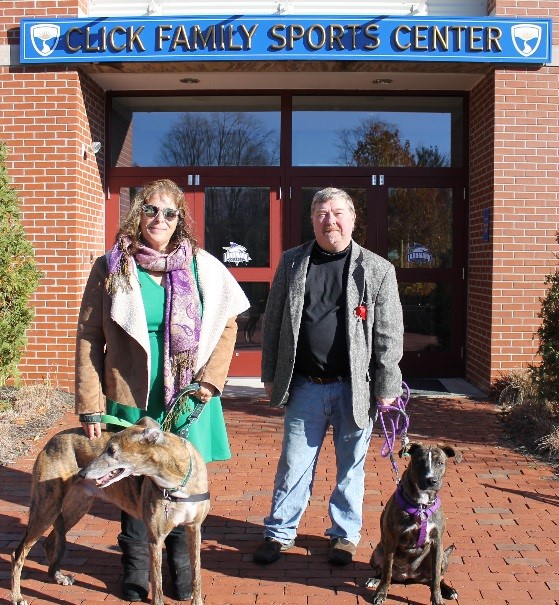 “It’s all about the students—we want to make them feel welcome every day.”

Landmark College icons John and Ellen Wood have been part of the community since 1992, living on campus for all twenty-five years. In their decades at the College, they have supported countless students, raised their own three children—Caitlyn, Liz, and James—and helped to bring dogs to the residence halls. Currently they live on campus with greyhound Nigel and Plott hound Jessie-Anne.

Their history with the College is long, with many twists and turns over the years. John remembers the impact of 1999 Hurricane Floyd on campus, which led to washouts on upper campus and drastic sand bag measures to keep buildings safe. Ellen remembers raising three children on campus who now range in age from high school to post-college. She said, “It was great to raise kids here, and it was a great learning experience for the students to have babies and children around.”

The entire Wood family has been actively involved in Landmark College activities. For the last seven years, Caitlyn has held various roles spanning from building manager in the Click Family Sports Center, to night proctor in the High School Program, to resident assistant (RA) in the Transition to College Program. Most recently, Caitlyn has served as the assistant women’s soccer coach. Over the last five years, Liz has worked in the High School Program running an afternoon activity, as well as in other summer programs as an RA. James has participated in team practices and has worked on a computer project with a current student. “It is unique raising a family on campus,” said John. “This has been a wonderful playground.”

The newest members of the Wood family are their dogs Nigel and Jessie-Anne. The foster caregiver of rescue dog Jessie-Anne delivered her to campus in September 2016. When Jessie-Anne first checked out her new home and yard, students showed their enthusiasm by chanting, “Jessie! Jessie!” Based on the student response, Ellen said, “These dogs are a great connection for many of us—sometimes they are a little slice of home.” She described the nonverbal bond that many students have with Nigel and Jessie-Anne. “Having the dogs around is a stabilizing factor. They brighten people’s days, which is a great benefit.”

A theme in all of John and Ellen’s stories is that they care deeply for the students, the mission, and the institution. Whether they are describing their office setups, which are designed to be comfy and welcoming, or talking about their sports philosophy, they convey dedication to the wellbeing of students. “It’s all about the students,” they both said. “We want them to work hard in classes and have a good time playing sports—it’s about growing and having fun.”

Recently, John wrote an appeal letter to help in fundraising. His goal is to help the College stay strong into the future. Explaining why he gives to the College, John wrote, “Over the years, we have seen nothing short of miracles occur with many of our students. The hard work and drive of the members of the LC community is a clear example for all colleges to follow. I have spent almost half of my life working at Landmark and do not regret one day.”