Rhetoric is the art and skill of persuasive communication. Sometimes it is defined more broadly as the art of effective communication by those who wish to recognize that the purpose of communicating is not always strictly to persuade. Usually, rhetoric refers to writing or speaking, but other modes of communication or expression can be considered rhetorically (thus, the term visual rhetoric).

Rhetorical analysis: A process or piece of writing that examines a speaker or writer’s use of rhetorical techniques in a given speech or text they have produced.

Rhetorical approaches or strategies: Ways of organizing communication. Within any given presentation or piece of writing, several usually work in combination. These strategies often have predictable patterns and key words and are also called rhetorical patterns, patterns of development, or modes of discourse.

A rhetorical situation occurs when a speaker, audience, and topic converge within a context to create a rhetorical act (such as a speech or written text).

The rhetorical triangle is a visual model of the rhetorical situation that helps us to analyze any act of communication. (See the diagram below.) The three points of the triangle represent the speaker/writer, the audience/reader, and the topic/issue. This is also called the Aristotelian triangle because Aristotle (Greek philosopher, 384 – 322 BC) first described the interaction among topic, speaker, and audience. 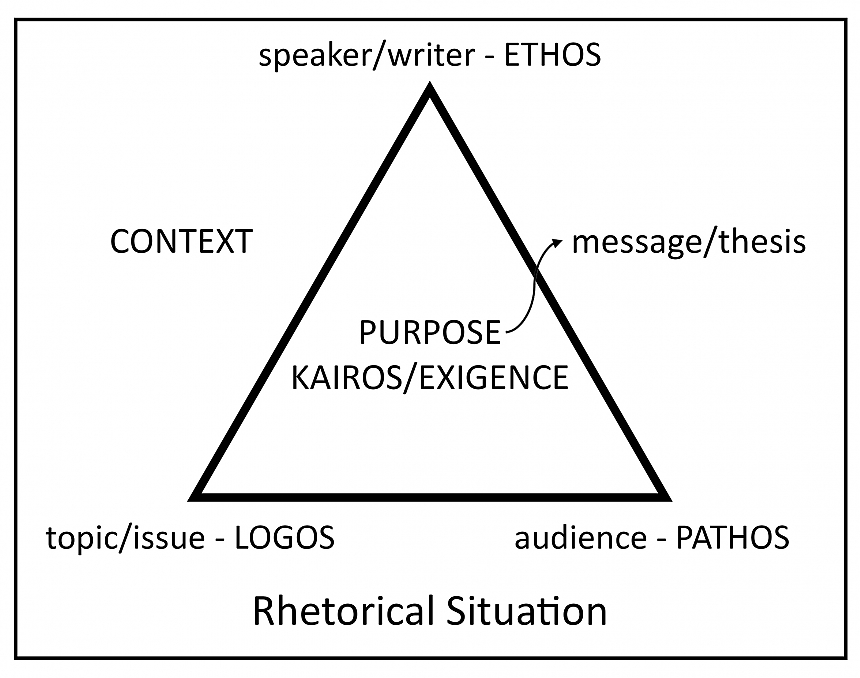 These three points of the rhetorical triangle can also be connected to the three main rhetorical appeals: ethos, pathos, logos, as well as an appeal, known as kairos.

Rhetorical appeals are ways a writer can use evidence and language to achieve an effect on or reaction from the audience.