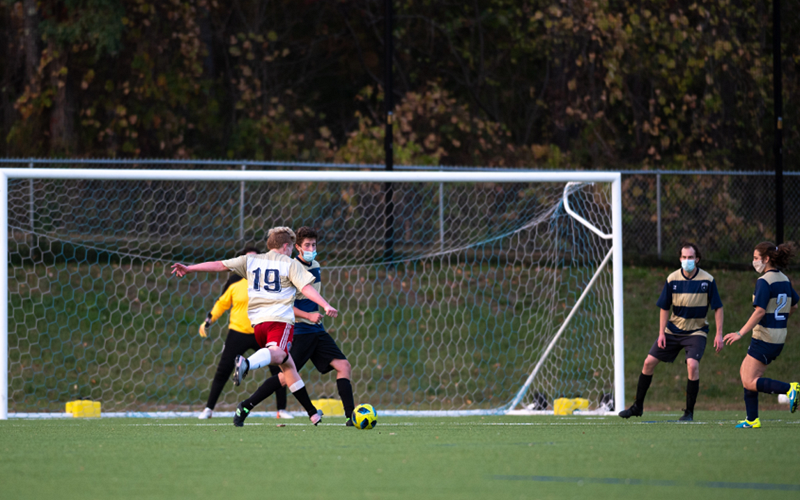 Sports on Campus: What’s Safe … And According to Who?

Landmark College may not be particularly known for its athletics and sporting events, but it has a vibrant athletics department nonetheless, one that is still in the midst of figuring out how and where to safely operate under restrictions related to the COVID-19 pandemic.

Currently, the only sports officially taking place are Soccer and Cross Country – but it is not uncommon to see baseball hopefuls playing long-toss out on the quad between classes.

“Baseball and Softball are typically Spring sports,” said Kari Post, Director of Athletics, Fitness, and Recreation at Landmark. “Skill-building exercises are allowed as long as distance is maintained.”

The aforementioned team sports that are officially taking place have some key modifications.

Cross Country runners will take on routes that do not leave campus property, they are also expected to keep a distance while they’re running. Although masks are optional for runners, they must have one on hand at all times.

While Cross Country is a more individualized sport – easier to pull off amid pandemic limitations, according to Post – team sports such as Soccer will be limited to scrimmage play during their seasons.

Throw-ins will be kick-ins for Soccer, and absolutely no headers are allowed, thus keeping players’ hands and heads off the ball as much as possible.

“Usually by now I would have had as many as five other institutions reaching out to me to coordinate event scheduling, but there’s been nothing … I don’t think anybody else in our area is planning [collegiate competition],” Post said, shaking her head.

She continued: “Even if they were, other schools’ students haven’t signed our health pledge, and therefore wouldn’t be allowed on our campus … we can’t force them to sign our pledge, nor could they force our students to sign theirs.”

Post said that the situation around sports – much like everything else – is somewhat in a state of perpetual evolution as the college receives guidance from the state of Vermont. The college also looks to other institutions for guidance and inspiration.

“We speak with other organized sports professionals at this level to see what they’re doing, and model how we operate based on the precautions of others in similar positions to us,” Post said, “C.I.R.T. must approve of all off-campus visitors and activities.”

C.I.R.T. is Landmark’s Critical Incident Response Team, and has been in existence for at least 8 years, according to Executive Vice President Jon MacClaren.

“Back in early March 2020, with early indications of the impact of the COVID-19 Pandemic on the Landmark College campus, the C.I.R.T. members began to meet mostly twice a week,” said MacClaren.

“We asked the Director of Counseling and Wellness, Jackie Mills, and the Director of Health Services, Jeff Huyett, to join these meetings,” he said. “We have continued meeting regularly all summer and just recently, scaled back our schedule to one meeting a week.”

The core of the committee is made up largely of individuals in Landmark’s upper administration as well as other key staff members responsible for the overall health and safety of the campus.

According to President Peter Eden, Michael Luciani emerged early on as the de facto coordinator of CIRT, hosting the meetings, keeping the minutes, and taking actions where needed. Federal and state COVID guidelines have been and continue to be disseminated to the landmark public from his office.

As of the first week of classes, 41 students have expressed interest in participating in the two officially allowed sports, 23 of which are new to Landmark.

“The majority of new families and students interested in Fall 2020 enrollment were not concerned about sports,” said Sydney Ruff, Director of Admissions. “Many families were very concerned about how much students would be in contact with each other.”

“Hopefully in future semesters, we will have more interest and ability to offer more sports [to prospective students] like in previous years,” she said. “We have 121 new students that came in for the fall class (110 on-campus, 11 online).”

With 23 of the 110 new on-campus students interested in the only two allowed sports as of the first week of classes (over 20%!) it is clear that such extracurriculars require perhaps just as much attention from C.I.R.T. as everything else to ensure the health and well-being of the campus. Play safely, everyone!