All across America small businesses have either had to change or shut down as a direct result of the pandemic. Putney is no exception. Businesses like the Putney Food Co-op, the Putney General Store, and Antidote Books have been forced to change how they do business entirely. 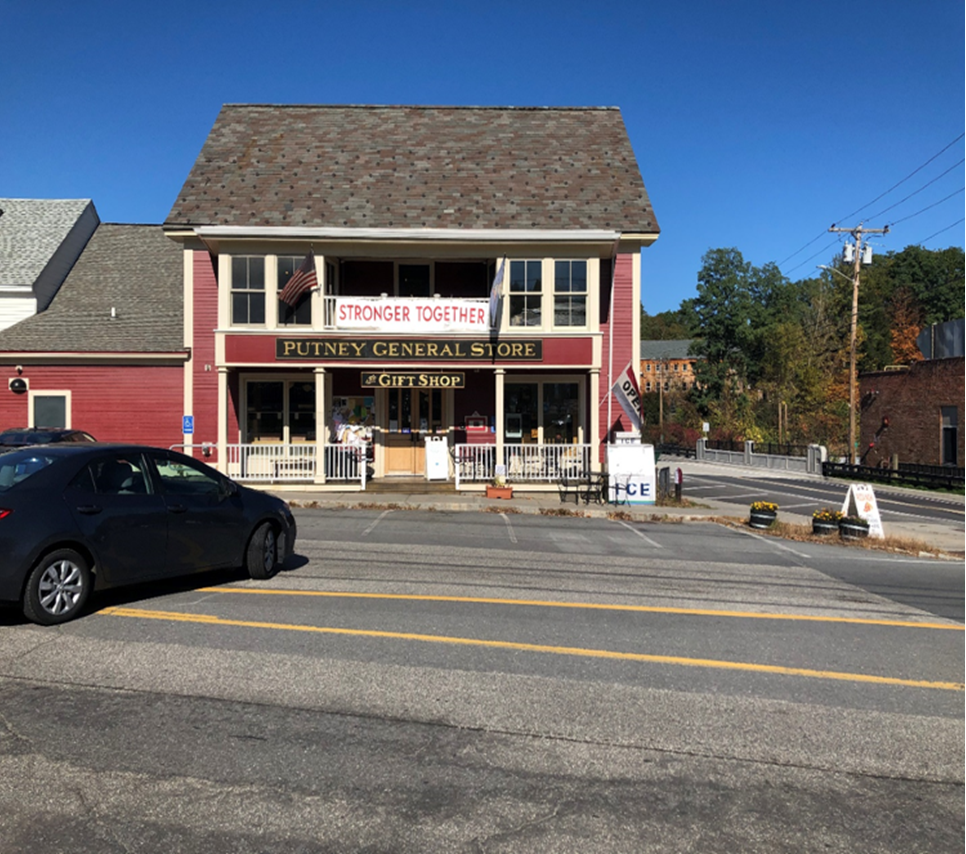 The Putney General Store (pictured right), one of the oldest businesses and buildings in Putney, is no stranger to hard times since it was rebuilt in 2011 after a pair of devastating fires. When the pandemic hit, the store quickly adapted by offering curbside personal grocery shopping.

“Customers would call and order groceries over the phone, and employees would gather the items and bring them to the curbside to be picked up,” said Kim Cosco, one of the owners of both the Putney General Store and the Phoenix Gift shop located on the next floor directly above.

“We changed a lot of how we do business,” said Kim Cosco, “this was a major blow - the gift store section had just opened in November.”

When the pandemic started, the Putney General Store also had problems with employee retention. “We had a number of employees who were not able to work because they had certain health conditions that prevented them from working in public.” Cosco also added that some workers were extremely nervous about continuing to work given the circumstances, an anxiety that would be offset by just how much business slowed down.

Luckily, since business has started to pick up again and COVID becomes better understood, most employees have returned to work, reassured by a better understanding of how to work safely during the pandemic. As such, the Putney General Store has been reopened for in-person shopping since June.

The Putney Food Co-op never fully closed down due to the pandemic. However, they did have to change their hours to stock and limit employee contact with customers. Much like the General Store they also improvised to be able to offer curbside service to customers.

While some businesses have been able to adapt and continue to generate revenue during the pandemic, not all businesses have enjoyed similar rebounds to the General Store or the Co-op. Carolyn Handy, the owner of a small bed and breakfast, has had trouble with her business since the pandemic started.

“Although I didn’t officially shut down the business, I had no customers because of the state’s requirements, which are very restrictive,” Handy stated, adding that she has no employees, and that the business is her personal source of income. “I had to adjust my personal budget and cut back as much as possible.” She recounts the measures she took to do so, “I shopped around and found a much cheaper car insurance package. Sometimes I cut my own hair instead of going to a hair salon. I postponed dental procedures and trips to visit family.”

As a sole proprietor, there is no paycheck protection money available, although she is receiving state unemployment benefits until they run out, however, Handy states that “they don’t replace the amount of money I earned when I was working.”

Some businesses in Putney have been able to adapt to the new rules and regulations brought about by COVID, but others have struggled immensely. Antidote Books is somewhere in the middle. They initially shut down due to struggles with adjustment to the new regulations.

“Antidote is not exempt from being affected by COVID,” said owner Ruth Rodriguez, who had to shut down her business in March, before finally allowing shopping by appointment and groups of two shoppers at a time around June. Ruth and her staff also had to narrow it down to one person working in the store at a time, which has boiled down to Ruth operating solo through this entire ordeal.

Despite slow sales, Rodriguez is confident that her method of adjusting her operations was the right course of action. “I feel that there is always room for improvement, and at the beginning it was hard to make that adjustment which is why closing was a good solution. I feel that the adjustment has been good because we have taken it very slow”

Rodriguez maintains that business is “alright” as of September. It is a used bookstore, and with browsing reduced to a minimum, sales have been down.

COVID has proven to be a great challenge for most businesses all around Putney.  While some businesses had to temporarily close to make adjustments in their operation, others had to stop their work entirely due to complications with the rules caused by the COVID-19 outbreak. It seems that the only thing we can do during uncertain times like these is hope things will get better soon.