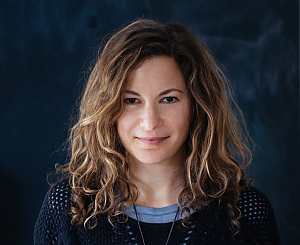 Amanda will talk about creating a life on her own terms, including becoming a professional comedian and publishing thirteen books. Despite growing up with an undiagnosed panic disorder and an unspecified learning disability, she’s managed to live a full and joyful life. She’ll discuss the writing process and how she accomplished goals she was consistently told were out of her reach.

Amanda Stern is the author of The Long Haul and eleven books for children written under pseudonyms. In 2003, she founded the legendary Happy Ending Music and Reading Series, which required creative artists to take risks onstage. The multi-disciplinary series became the gold standard for literary events; many of today’s series are (knowingly and unknowingly) based on Happy Ending’s model. It was produced at Joe’s Pub and later at Symphony Space. The series ended in 2018.

Stern’s most recent book is Little Panic, a memoir about growing up with an undiagnosed panic disorder in Etan Patz era Greenwich Village is out now from Grand Central Publishing. Amanda is a mental health advocate, speaker, and advisory board member for Bring Change to Mind. She lives in Brooklyn with her dog, Busy.

Amanda Stern is a fourth generation native of Manhattan; raised without an accent.

Her work has appeared in the New York Times; the New York Times Magazine; the New York Times Book Review; Filmmaker, The Believer, Salon, Blackbook, St. Ann’s Review, Post Road, and others. Her personal essays have been included in several anthologies: Love is a Four Letter Word, The Marijuana Chronicles, Women in Clothes, the anthology A Velocity of Being edited by Maria Popova, and her Believer interview with Laurie Anderson was included in Confidence, or the Appearance of Confidence: The Best of the Believer Music Interviews, 2014.

Her first novel The Long Haul (Soft Skull Press) was published in 2003. Of her metaphors, the San Francisco Chronicle wrote, “they’re so fresh, they’re almost jarring.” Concurrent with the publication of The Long Haul, she launched The Happy Ending Music and Reading Series as an antidote to her anxiety. The series, designed around public risks, became a critical success, and its inventive model paved the way for the proliferation of music and reading series created in its wake.

She spent her 20s working in film for Ang Lee, Terry Gilliam and Gregg Araki, but primarily for Ted Hope and James Schamus at the famed (and not forgotten) Good Machine, where she worked closely with Hal Hartley. After that she became an accidental comic, co-hosting the Lorne Michaels series, “This is Not a Test” with host Marc Maron at “Catch A Rising Star.” Later, in the music world, she worked for David Byrne, curating a narrative section of The Talking Heads Box Set, “Once In A Lifetime.”

She’s published thirteen books, nine for children (the Frankly, Frannie, series for Penguin under the name, A.J. Stern), two for young adults (You’re So Not Invited to My Bat Mitzvah and its sequel, under the name, Fiona Rosenbloom), and one novel of literary fiction, The Long Haul, under her real name. Her most recent book is a memoir called Little Panic, which came out on June 19, 2018 from Grand Central. She’s held several fellowships at both The MacDowell Colony (once as the Philip Morris Company Fellow) and at Yaddo. In 2012 she was a NYFA fiction fellow, and she was a Barnes and Noble Discover Pick in 2018 for her memoir, Little Panic.

Amanda is a mental health advocate, speaker, and advisory board member for Bring Change to Mind. As a writer, she’s required to live in Brooklyn, which she does, with her daughter Busy, who also happens to be a dog.