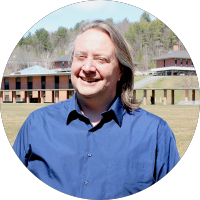 Joshua believes in and teaches the benefits and possibilities that theater creates for students with learning differences. Joshua has witnessed many remarkable transformations in students while in theater classes at Landmark College. He is excited to bring a more robust array of theater courses to LC that will give students an increased opportunity to learn and then participate in the remarkable life-lessons that theater offers.

Joshua has directed, wrote, and produced theater and film on both coasts, including world premieres by Suzan-Lori Parks, Julia Cho, and Padraic Duffy. In Los Angeles his directing work has been seen at the REDCAT, Echo Theater Company, Theater of N.O.T.E., 24th Street Theater, Bootleg Theater, Sacred Fools Theater, Boston Court Theater, and the Edge of The World Fest. In New York City his directing work has been produced at numerous venues, including Judson Theater, Lincoln Center Theater, LAByrinth Theater, HERE Center for the Performing Arts, and the New York International Fringe Festival. He is a member of Lincoln Center Theater Director’s Lab, and an associate artist of Los Angeles’ Echo Theater Company, and for many years he was an advisor to the Sundance Theater Lab. Joshua is the founding artistic director of Shoot The Moon Theater Company (shootthemoontheater.com), which performs out of Brattleboro, Vermont. With Shoot The Moon Joshua directs and/or creates three shows a year, including its Annual Halloween Spectacular. His next project with Shoot The Moon is a long-form theater piece that examines the effects of the opioid crisis in small-town Vermont during a 4th of July.

In his spare time he is a devout fan of the Boston Celtics, enjoys playing pool, and cooking for his family. He has also coached youth sports for many years.