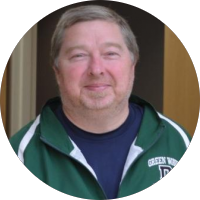 John Wood has been a Resident Dean since 1992, and he has been published in a variety of periodicals including "Coach and Athletic Director Magazine." Wood has also been one of the foundations of the Physical Education Department since its creation in the late 1990s. He has coached basketball and baseball teams at Landmark College since 1992.